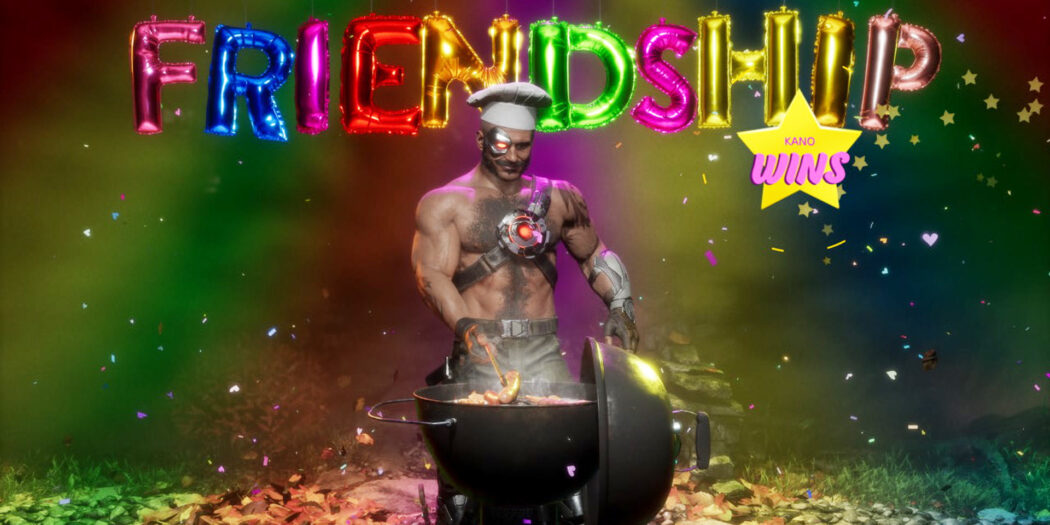 Friendship? Friendship?! Mortal Kombat 11’s new return to the kinder and gentler (kind of) days of MK2, and its Fatality alternatives are coming up.

Why can’t we be friends

What’s the best way to end a brutally bloody, almost laughably gore soaked match of one on one combat? If you said an over-the-top move that dismembers your opponent… well you might not like what NetherRealm has unleashed today.

That’s because the Mortal Kombat developer has revealed a much more in-depth look at what the returning Friendship moves will look like in MK11. Just as crazy as the Fatalities that they can take the place of, the Friendships can be done at the close of a fight, when you hear that famous VoiceOver telling you to “Finish Him/Her”.

Only instead of stabbings, slashings, and detonations, when you pull off a Friendship you’ll pull out a saxophone and serenade your enemy. Then again, maybe you prefer a giant teddy? Or maybe even an ice cream cart.

Check out the reel below to see the opposite of carnage (mostly):

Ready to be friends? The Friendships are a part of the free update that’s timed to coincide with the release of Aftermath. If you don’t know what that is, it’s the first ever expansion pack for a Mortal Kombat game, bringing in Shang Tsung as the main villain of a new story spinning out of MK11’s campaign.

As I mentioned though, the update is free and does not require the purchase of Aftermath. It’s in with stage Fatalities (also as made famous in MK2) and some new stages.

Both free and paid, you’ll be able to add all of the above onto your copy of MK11 as of May 26th.

Jason's been knee deep in videogames since he was but a lad. Cutting his teeth on the pixely glory that was the Atari 2600, he's been hack'n'slashing and shoot'em'uping ever since. Mainly an FPS and action guy, Jason enjoys the occasional well crafted title from every genre.
@jason_tas
Previous Fresh Rune II update brings finishing moves and more
Next SpellPunk VR adds host of improvements in new update