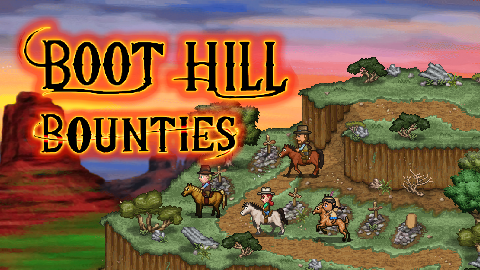 Looking for some old west action? Like JRPGs? Then you’ll want to take a look at Boot Hill Bounties, from Experimental Gamer Studios.

Well isn’t this interesting. Popping up from its predecessor’s successful Kickstarter campaign (Boot Hill Heroes) is Boot Hill Bounties. It’s sounding pretty interesting too. The game brings together the themes of Red Dead Redemption, and the style and gameplay of a JRPG.

“Boot Hill Bounties is a return to the glory days of detailed SNES RPGs like Final Fantasy, Earthbound, and Chrono Trigger,” says David Welch, the indie developer behind Boot Hill Bounties, “but we’ve made key updates to make the genre feel fresher and exciting. With Boot Hill Bounties, we’ve reimagined the classic JRPG genre by combining the elements we love with things we always wanted to see. For example, we always wanted to experience more RPG adventures with our friends, so we included the ability for up to four players to hop in at any time for local co-op.”

That’s right, co-op. Bounties offers quite a bit, including four-player, local co-operative play. A standalone game, Bounties also has exploration elements, towns to visit, and battles against both criminals and wild animals. Gamers can also expect power-ups, weapon mods, and side quests to play through. It’s all on the way to stopping the dangerous Saints-Little Gang.

Already available on the PC, EGS has announced that it’ll be landing on the Nintendo Switch tomorrow, April 14th.

Jason's been knee deep in videogames since he was but a lad. Cutting his teeth on the pixely glory that was the Atari 2600, he's been hack'n'slashing and shoot'em'uping ever since. Mainly an FPS and action guy, Jason enjoys the occasional well crafted title from every genre.
@jason_tas
Previous Is a Resident Evil 4 Remake on the way?
Next Resident Evil 3 a hit, ships 2 million copies in debut week