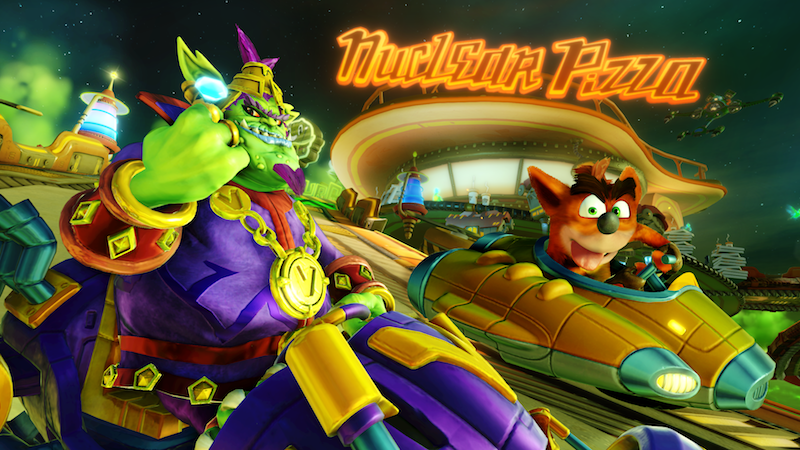 Crash and crew head to an alien world in the Gasmoxia Grand Prix, hitting this week. The pack concludes a season of content for Activision’s racer.

Earth is apparently no longer the happening place it was to invading racer Nitros Oxide. That might be because Crash and his crew have been steadily kicking his backside back into orbit, but that’s neither here nor there.

What is, is that the evil karting champ has challenged the cast to one last race. This time though, it’s to be on his home planet, in the Gasmoxia Grand Prix.

During this toxic race to the finish, players will challenge each other on an epic new track high up in Gasmoxia’s atmosphere, where two rival fast-food conglomerates are battling it out for planet domination (and a CTR TV sponsorship). New skins, karts, an imperious new character to unlock and a new track to conquer, touted as the most technical track ever assembled in Crash Team Racing – – players will have a wild ride in this Grand Prix season!

As with all of the other Grand Prix’ for Crash Team Racing, this last pack will be free of charge. The pack arrives tomorrow, February 20th, and includes:

Jason's been knee deep in videogames since he was but a lad. Cutting his teeth on the pixely glory that was the Atari 2600, he's been hack'n'slashing and shoot'em'uping ever since. Mainly an FPS and action guy, Jason enjoys the occasional well crafted title from every genre.
@jason_tas
Previous Finish the fight – Hasbro loading up Halo Nerf line
Next Episode 66: Game of the Year Discussions