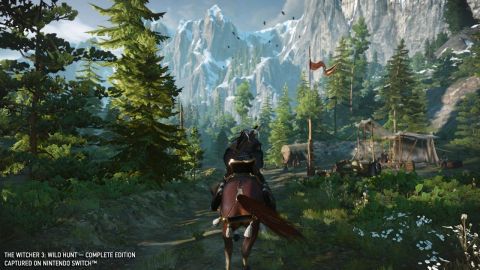 Home / News / Nintendo Download: You Ready to Start Your Hunt?

Another big week for Nintendo Switch gamers kicks off with huge releases like The Witcher 3, Overwatch, Baldur’s Gate, and plenty more.

Just as most Nintendo fans are probably done (or finishing up) with Link’s Awakening comes a fresh load of RPG’s. The Witcher 3: Wild Hunt is probably the biggest of those, but there are more hitting this week as well.

A quartet of re-releases make their way to the Switch this week. That includes both Baldur’s Gate titles, Icewind Dale, and Planescape Torment. Four big D&D classics there.

But wait, there’s more! Overwatch: Legendary Edition, The Ninja Saviors, Zombieland: Double Tap, and the intriguing Valfaris all hit as well. So there’s quite a bit to play, all told.

Jason's been knee deep in videogames since he was but a lad. Cutting his teeth on the pixely glory that was the Atari 2600, he's been hack'n'slashing and shoot'em'uping ever since. Mainly an FPS and action guy, Jason enjoys the occasional well crafted title from every genre.
@jason_tas
Previous NYCC 19: NECA debuts new Turtles figures
Next Bela Lugosi returns as Dracula in new comic