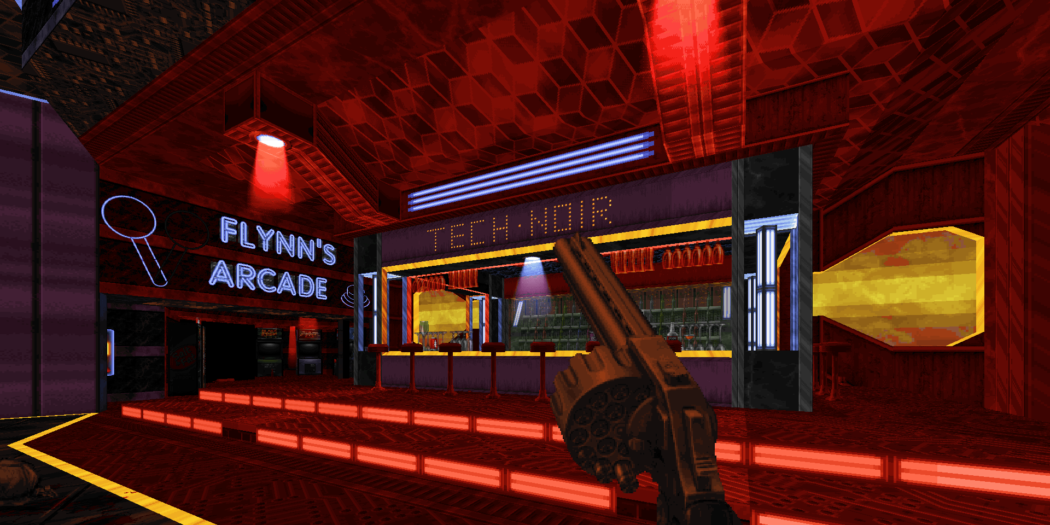 I don’t have to tell you what a look will show you already: Ion Fury is an old-school FPS. The game has been built on the Build engine, which you may recognize from the likes of Duke Nukem 3D and Shadow Warrior, and updated with new physics systems and more.

It’s not just aesthetic. Ion Fury has no regenerating health, sticking to cover tends to be the least effective approach, and the difficulty is solid even on the lowest levels. Every stage is an expanse of secrets. Blood-thirsty goons will stop at nothing to leave you dead. A prodding jump will give you a game-over.

It’s fast-paced, supremely smooth, and ready to kick your ass.

Just what the doctor ordered.

Story-telling is done through brief goading by a televised asshole and quick and dirty one-liners (“I didn’t think one man could have so many complexes) from the foul-mouthed (“Dance, mother fuckers!”) Shelley “Bombshell” Harrison.

(Yes, the game used to be called Ion Maiden. Iron Maiden had a problem with it. No, it’s not a perfect world we live in.)

Essentially, Dr. Heskal is a bastard, and somebody has to put him in his place.

Fortunately, you’ve got everything you need to do that. The weapons line-up nice and pretty on your number keys. Each gun feels great, whether you’re running double Penetrators (SMGs with burning bullets) or lining up headshots with the Ion Bow (a crossbow of certain death). Short of a scoped sniper rifle, it’s all here, and it’s everything you’ll want against the legion of augmented criminals who are set at stopping you.

Figuring out which gun works the best against which baddie is much of the fun of your extensive arsenal (the revolver is particularly great at taking out spiders, while your grenade launcher and other explosive options are perfectly proficient at Hydra-like robotic centipedes), until your ammo reserves drop so low the best option is your only option.

At that point, it’s time to open grates and ferry out those secrets. They’re everywhere, stashes and caches of ammo, armor, and health kits that top you off and keep you ready for action. Finding them can mean playing through finicky mouse-and-keyboard platforming sections (fortunately, the path to completion expects you to do very little precise jumping), jumping trustingly into face-melting acid, and otherwise scratching every inch of your desire to explore.

I hope you want to, too, because Ion Fury is not the kind of FPS that funnels you to your next firefight. Usually, it’s not so bad. You track down necessary colored-keycards to open doors, and use your map to point you in the right direction. Sometimes, though, I searched for half an hour at a time through the long-dead remains of my previous firefight, shooting at grates, doors, glass windows and more in my attempts to find the way forward.

Stumbling is the name of that game, mostly in the dark, because the game can be pitch black. Picking out enemies, let alone your way through, can be difficult in the shadows, and you’ll be spending plenty of time in them. Make sure your screen is wiped-down (or use this opportunity to figure out just how much dust has settled) and brightness adjusted before you begin.

Most of the game takes place indoors, leading to a somewhat cramped feel, and making every outdoor set-piece a breath of desperately-needed air.

Unfortunately, while I was playing through Ion Fury, I did run into some save file issues, where my saves from the final boss fight would crash my game when I attempted to load them, without fail. The only work around: to go back and replay the last 45 minutes of shooting, jumping, and swiping key cards.

The good news is, the riffs are absolutely rocking when you need them to be, but mellow enough to be meditative when you’re circling a room for that interactive door you missed. Jarkko Rotsten has put together a soundtrack to be enjoyed even when you’re not playing the game.

If you’re generally unfamiliar with the don’t-stop-only-shoot formula of ye olde shooters (surely the 90’s can classify by now), you’ll find the lower difficulties plenty. It took me a few hours to break the habits of my years of Call of Duty and Battlefield, but once I realized every single attack is telegraphed by sound and aims for where I used to be, I was set to run, jump, and blast my way into the future.


Multiplayer will be coming post-launch at an unspecified time, which we’ll be sure to check out.

Ion Fury is a blast from the past for PC shooting, but with auto-saves, corpse-kicking physics, and a well-dressed female protagonist. It has all the things we need, but a few more lights would sure have been appreciated during the 10-12 hour campaign, and things sure would have been easier if my save files all worked as intended.

Keen Eye on The Past

Ion Fury hearkens back to a time of kicking ass and taking bubblegum. Modern conveniences meet old-school design, but some more time outdoors would have done the game some good.

Brutal Gamer's Nintendo Editor began his gaming life a little late- at five years old. But he's made up for it in the two decades since, gaming and writing about gaming with the same passion, fervor, and unrelenting love as his five-year old self.
Previous Friday’s Limited Run Games offerings include Turok, Bard’s Tale
Next Genesis Does in new trailer for the Mini