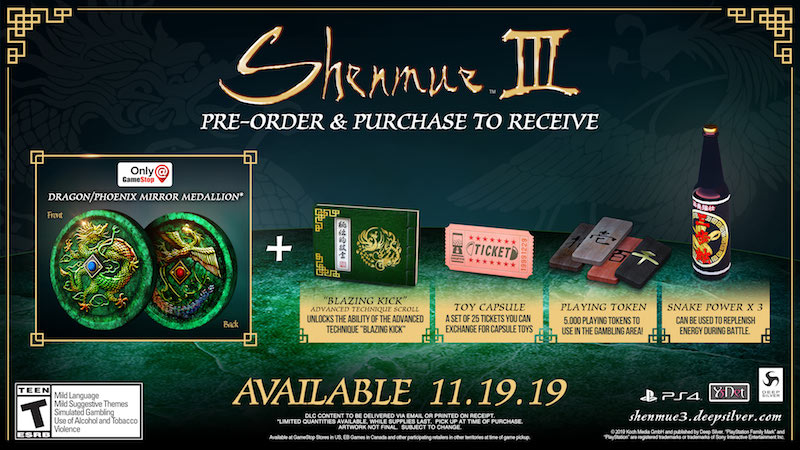 It might have been a little bit of a rocky road, but Shenmue III is finally -almost- here. And so of course there’s a list of pre-order incentives too.

Shenmue is a fascinating series, with a staunch support base. I can’t honestly think of too many other video game series’ that’ve taken so long off between releases and still held their fans in this kind of fervor.

Most might have been forgotten, but Shenmue is the exact opposite of that. Maybe that’s due to it not really having ended at the close of Shenmue II. Then again though, I’m sure the deep story and massively interactive world have something to do with it too. After all, if the story was a snooze, nobody would be looking for more.

In any event, Shenmue III is just about here. And so, as you might’ve guessed even without the headline, there are some pre-order goodies to talk about.

There are actually two distinct sets of these. Some you’ll get no matter where you buy the game, and some are locked to specific retailers. As for the more overarching bonuses, pre-ordering from any participating store will get you:

Amazon, Best Buy, Gamestop, and EB Games (in Canada) all have more exclusive items to get you to buy from them. Whether or not any of this becomes available to all players is an unknown, so choose wisely.

*at participating retailers in the US, Canada, and Latin America. DLC codes printed on receipt or delivered via email by retailer. Steelbook & Dragon/Phoenix Mirror Medallion quantities limited, while supplies last. Pick up at time of purchase

Shenmue III hits the PS4 as a console exclusive, as well as the PC, on November 19th.

Jason's been knee deep in videogames since he was but a lad. Cutting his teeth on the pixely glory that was the Atari 2600, he's been hack'n'slashing and shoot'em'uping ever since. Mainly an FPS and action guy, Jason enjoys the occasional well crafted title from every genre.
@jason_tas
Previous BG’s Game of the Month for June 2019 is Super Mario Maker 2
Next Nintendo Download: Pillars of Eternity Comes to Nintendo Switch