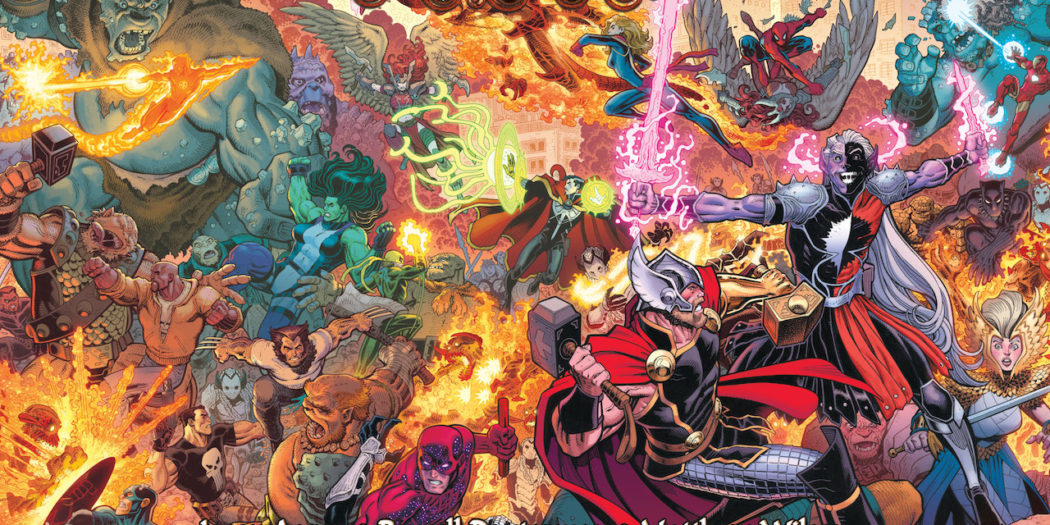 Home / Comics / The War of the Realms explodes with new teaser

The War of the Realms explodes with new teaser

Marvel’s huge event for 2019 is War of the Realms. And from the looks of this new teaser, it’s going to include every hero in the Marvel U. And then some.

Begun, this War of the Realms has

Big, bold, and over the top all seem like appropriate ways to talk about War of the Realms. So far the one monster-sized event that Marvel Comics has on tap for next year WotR is set to include every major Marvel hero/team.

The good guys will be going up against a major foe too, or should I say major “foes”? WotR will feature a whole mess of Thor-related baddies, as a war between the 10 realms of Norse mythology spills over onto Earth – Midgard itself.

Marvel is promising major happenings with this one, and some long lasting consequences too. Watch for it to kick off this April.

In the meantime, check out the full preview below.

The War of the Realms has made Earth its battlefield! This April, one of the largest conflicts to engulf the Marvel Universe erupts in The War of the Realms – a new, epic crossover event from the award-winning creative team of Jason Aaron, Russell Dauterman, and Matthew Wilson, with covers by the legendary Arthur Adams! Marvel’s 2019 war-to-end-all wars must enlist every great Marvel Hero to save Earth…and beyond!

Today, Marvel is proud to present THE WAR OF THE REALMS TEASER TRAILER, featuring Jason Aaron and editor Wil Moss, complete with the first look at issue #1’s cover from Arthur Adams!

“The story really begins when that war that’s been brewing for years in the pages of Thor explodes here in Midgard,” teases Aaron. “And at that point, it’s bigger than a Thor battle –everyone becomes a part of that battle.”

“Even though this story involves a lot of moving pieces and elements from the Thor comics and the Avengers comics, it’s something that everyone can just dive into,” adds Moss.

Jason's been knee deep in videogames since he was but a lad. Cutting his teeth on the pixely glory that was the Atari 2600, he's been hack'n'slashing and shoot'em'uping ever since. Mainly an FPS and action guy, Jason enjoys the occasional well crafted title from every genre.
@jason_tas
Previous Project Warlock (PC) Review
Next The Single-player is Smashing in Super Smash Bros Ultimate