New portable plays off the look of classic GameBoy, includes over 260 games

Load up on a whole mess of classic games and take ’em anywhere you like. Retro-Bit’s newest classic-inspired console is the Go Retro! Portable.

Turning back the clock

You probably know the name Retro-Bit from somewhere. The company has been making classic console accessories and the like for quite a while at this point. And that includes consoles for you to play your retro collection on. This new announcement is right inline with that last bit, though with a twist.

The GoRetro! Portable (exclamation point included) is a little handheld that looks a lot like the classic Nintendo GameBoy. This one doesn’t take carts though, and instead will have a slew of games built-in. How many? More than 260 titles in all. 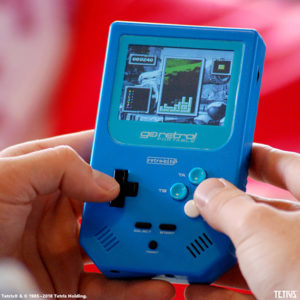 I sounds like these won’t include any junk titles too, who cub would be a very good thing indeed. Retro-Bit is touting a catalog of games that include those from companies like The Tetris Company, Capcom, and Data East.

Expect to see the likes of:

Oddly enough, the GoRetro! Portable won’t have a rechargeable battery. The unit will take 4 AAA batteries, but will run off of a micro-USB cable if you like. Retro-Bit does say that those triple-A’s will net you 10 hours of battery life however, so that’s nice. Other stats include a 2.8″ screen, audio jack, and what’s promised to be an “intuitive user interface”.

The GoRetro! Portable should be shipping out right now, and will run you $34.99 USD. You can nab one at stores like Target, Best Buy, GameStop, Kohl’s, and -of course- Amazon.

Jason's been knee deep in videogames since he was but a lad. Cutting his teeth on the pixely glory that was the Atari 2600, he's been hack'n'slashing and shoot'em'uping ever since. Mainly an FPS and action guy, Jason enjoys the occasional well crafted title from every genre.
@jason_tas
Previous One:12 Collective Batman Beyond (Action Figure) Review
Next NYCC 2018: DC announces new line of Batman cowls