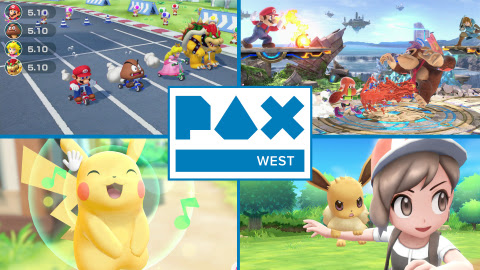 It should be a big PAX for Nintendo, as the company is planning on bringing their best new stuff for gamers to go hands on with.

“Many of our biggest fans descend on Seattle every year to celebrate video games at PAX West,” said Doug Bowser, Nintendo of America’s Senior Vice President of Sales and Marketing. “It’s the perfect venue for us to interact directly with our fans with fun activities and engaging hands-on demos with some of our upcoming games.”

With it right in Nintendo’s backyard, you’d expect PAX West to be a place where you could check out the company’s newest. And of course you’d be right, as Nintendo will have a plethora of great looking stuff on hand.

Right at the top of the heap will be the likes of Pokemon, Mario Party, and yes – Smash. Here’s the full lineup of what’ll be on hand, and playable:

You’ll be able to get hands on with all of the above from the 31st of this month through September 1st. PAX West takes place at the Washington State Convention Center, and Nintendo will be occupying booth #1939 on the floor.

Also, if you’re going, you’ll be able to meet Kit and Krysta from the Nintendo Minute. The hosts of the online show will be on hand, playing Mario Party. That’ll be on the 31st, helping to kick off the program.

Jason's been knee deep in videogames since he was but a lad. Cutting his teeth on the pixely glory that was the Atari 2600, he's been hack'n'slashing and shoot'em'uping ever since. Mainly an FPS and action guy, Jason enjoys the occasional well crafted title from every genre.
@jason_tas
Previous Shudder preps a spooky Halloween lead-in with scare filled September
Next Michael Ironside voices Darkseid in the newest LEGO Super-Villains trailer