Home / Comics / Avengers to get Halloween special this fall

Avengers to get Halloween special this fall

Marvel’s current Avengers book will be getting a spooky spinoff this fall. Get ready for an all-new horror themed Halloween Special.

As “Halloween specials” go, I have to say I’ve never pictured the Avengers getting one. And yet here we are, and it actually sounds kind of neat. That might be just that I’m a sucker for anything with jack-o-lanterns on it though, so keep that in mind.

This Halloween, the Avengers will shock readers with their spookiest stories and the most fearful tales! Iron Man and Captain America take on a journey for one of Howard Stark’s abandoned weapons…but what they find is different than any kind of horror that they’ve encountered… 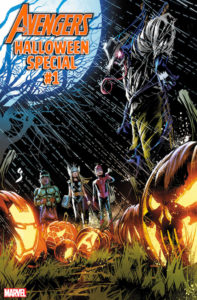 “It’s going to be a horror anthology with five frightful tales full of chills and thrills,” teased editor Jake Thomas. “The stories will showcase your favorite Marvel heroes through a funhouse mirror of the macabre, twisting their stories into terrifying tales sure to send shivers up your spine! The only thing scarier than reading this issue would be missing it!”

Don’t miss all the horror and thrills this October, when AVENGERS HALLOWEEN SPECIAL hits comic shops!

The Avengers Halloween Special hits stores (when else?) on October 31st.

Jason's been knee deep in videogames since he was but a lad. Cutting his teeth on the pixely glory that was the Atari 2600, he's been hack'n'slashing and shoot'em'uping ever since. Mainly an FPS and action guy, Jason enjoys the occasional well crafted title from every genre.
@jason_tas
Previous Harbinger Wars 2 #3 (Comics) Preview
Next Bandai Namco’s Code Vein pushed into 2019