Home / Action Figures and Toys / Movie Aquaman One:12 figure goes up for pre-order

Movie Aquaman One:12 figure goes up for pre-order

Mezco’s take on the Justice League movie Aquaman is now available for pre-order.

Hitting theaters right now is the Justice League film from Warner Bros. The movie offers fans the first look at the legendary super-team in live-action form, and stars a pretty heavy lineup of actors and heroes. Some of those have been in movies for a while now, like Batman and Superman. Some though, have never before been seen on film.

One of the newcomers to movie-land is Aquaman, brought to life by Jason Momoa. And he isn’t quite the Arthur Curry that fans might be used to. Aside from the physical differences to the modern comic book incarnation of the Atlantean king, this Aquaman seems a lot more roguish in general. And, well, he’s not actually a king. Not yet anyway, though that’s certainly something that might be addressed in the standalone movie. That’s a film Momoa is set to star in next year (2018).

But let’s get back to Aquaman’s appearance in Justice League, because that’s what we see here in Mezco’s latest pre-order.

The figure is clad in the movie’s green Atlantean armor, which is a little different for the One:12 Collective line. Much like the Iron Man figure, which hasn’t seen release yet, there are no soft-goods included. Honestly too, it’s looking pretty slick.

Aquaman hits the One:12 in Summer of 2018, and is pre-orderable right here. Check out the full details on the figure below. 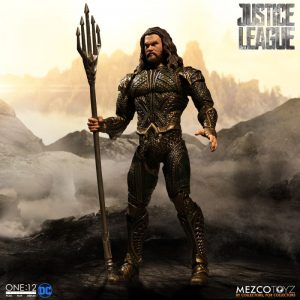 Jason's been knee deep in videogames since he was but a lad. Cutting his teeth on the pixely glory that was the Atari 2600, he's been hack'n'slashing and shoot'em'uping ever since. Mainly an FPS and action guy, Jason enjoys the occasional well crafted title from every genre.
@jason_tas
Previous Gentle Giant just announced the biggest R2D2 action figure of all time
Next Marvel teases… Infinity