“Fairy Tail: Dragon Cry” is a by the numbers film installment into the series, providing fun moments held together by a forgettable story.

The movie begins with the Fairy Tail guild being recruited by the kingdom of Fiore to reclaim an ancient staff known as Dragon Cry. Found in a dragon graveyard deep beneath the kingdom, the staff is capable of destroying entire countries in one fell swoop. Unfortunately, it was recently stolen by the black magic wielding Zash Caine, the rival Stella kingdom’s minister of state, and is now at risk of being activated by Stella’s royalty for a magic ritual that could prove far worse than anyone could imagine. Determined to prevent this, Natsu, Lucy, Gray, Erza and Wendy move to set things right before it’s too late.

The story certainly has potential, especially when focused on Natsu and the series’ overarching fallout from the disappearance of the world’s dragons, but squanders most of it by leapfrogging between villains and their respective plot lines. One moment it focuses on Zash and his hatred over an old betrayal by a rival kingdom, the next it jumps over to Sonya and King Animus, Stella kingdom’s royalty, and their equally tragic causes for wanting the world to end. Both end up competing for the viewers attention without ever developing into a believable antagonists, pulling the story down in the process. Likewise, some characters like Gajeel don’t ever serve a purpose other than cameos, but still eat up sizable chunks of time just to appear in the movie. 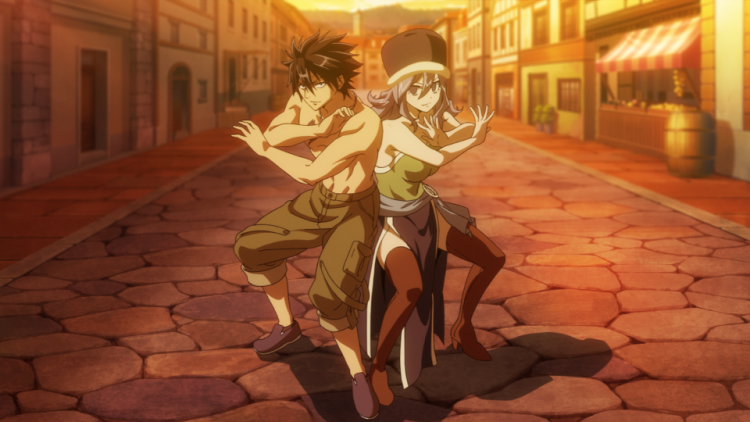 Luckily, the story’s core protagonists provide more well built character arcs, Natsu especially. Between flashbacks to his past and hints at his role in the larger series as a dragon slayer, his character provides some depth and stake to fights, and discoveries that otherwise would have been dragged down completely by the villains.

In terms of animation, the movie inhabits a middle ground between series and movie quality. Character models are consistent and fights have a clear flow and impact that’s easy to follow, but it lacks the polish and gleam one would expect from a feature film. It doesn’t deter from the experience much, but it can be frustrating when larger shots of tower climbing brawls or fantastical magic attacks feel like they belong in a weekly production.

Music, on the other hand, is stronger for sticking to the series’ core soundtrack. The main themes from the show make appearances to great affect, with celtic string compositions that add to the adrenaline of the film’s main fights and sell the sorrow of more dramatic moments.

The voice acting is very well done, with top notch performances by the movie’s core cast of characters. The battle cries are lively and intense, while the more emotional moments feel more believable thanks to convincing trembles and cracks.

Though it doesn’t amount to what it could have been, “Fairy Tail: Dragon Cry” still has enough moments to make it a fun distraction for fans and newcomers alike and prioritizes what makes the series enjoyable in the first place.

Though it doesn't amount to what it could have been, "Fairy Tail: Dragon Cry" still has enough moments to make it a fun distraction for fans and newcomers alike and prioritizes what makes the series enjoyable in the first place.

Keenan McCall is a journalist and writer with a passion for animation. From video games to anime, anything that sets art in motion will get him talking and writing nonstop.
Previous It is your destiny to watch this Destiny 2 launch trailer
Next Here comes a new challenger – Zangief joins Storm’s Street Fighter line