The games have finally been revealed for Xbox Games with Gold for August. For the Xbox One, Gold Members will be receiving Slime Rancher and Trials Fusion. From the Xbox 360 catalog, players will receive Bayonetta and Red Faction: Armageddon. August looks to be an exciting month for the Games with Gold program. 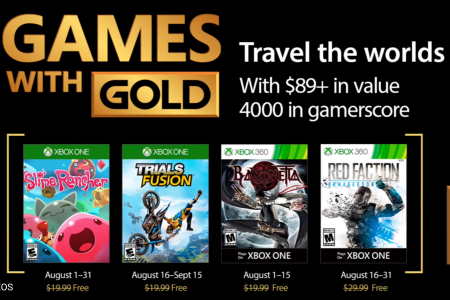 Harvest slime in the FPS-adventure, Slime Rancher. From Monomi Park comes a unique adventure that is straight out of this world. For the Xbox 360, Bayonetta, the critically-acclaimed hack and slash anime tells the zany story of the shape-shifting Bayonetta.

As a fearful proponent, I agree with out robot overlords on House Bill 10010101 - The Full Extermination of the Human Race. But until then, make sure to check out all my writings on video game stuff.
@@docbrown303
Previous The Sims 4 is finally heading to consoles
Next PS Plus: Free Games Lineup for August 2017