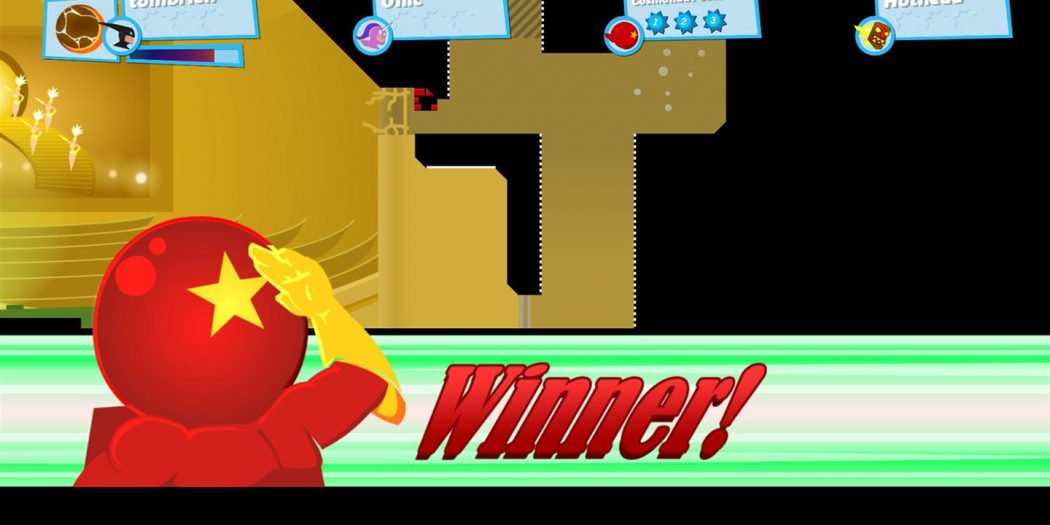 SpeedRunners (PC) Review: Run from the Crowd, and Win

Familiar platforming and tight design propel SpeedRunners to the front of the pack of inexpensive, local multiplayer thrills. 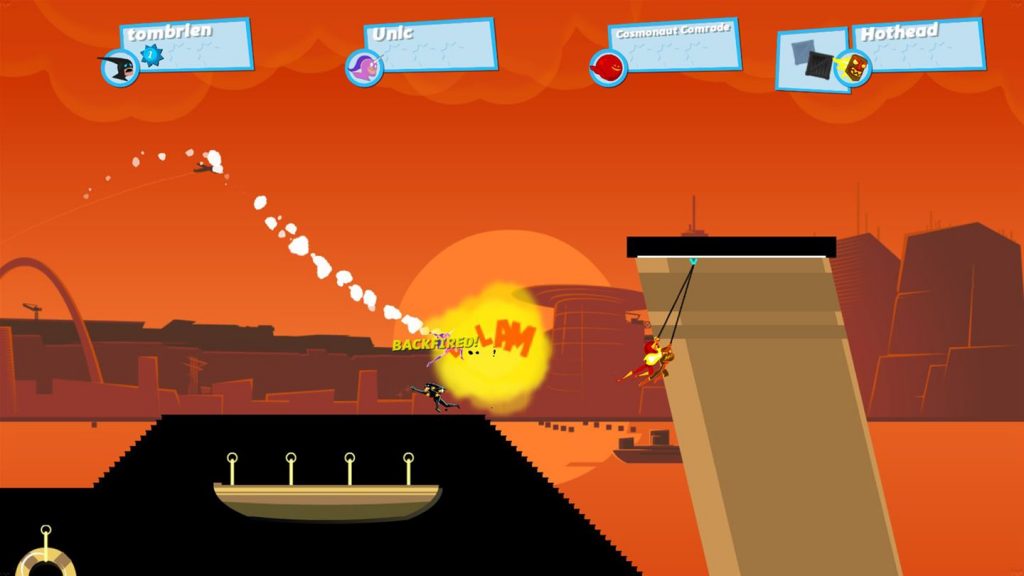 The local multiplayer game scene has been strong for a while now- thanks in no small part to small developers.  SpeedRunners is just one more title to add to your next game party.

It adds to its value by being a genre that usually focuses on the single-player experience.  Tight and tense platforming, and speed-running itself, rarely lay the foundation for a multi-player experience.  But the best SpeedRunners will be those who can keep calm from jump to jump, and master every option for every split-second decision.

May the Best Platformer Win

The set-up is simple. Four players will race around a circuit in a 2D platformer.  The trophy isn’t given to the player who can cross a finish line first, though.  There is no finish line.  Victory comes by eliminating your opponents, leaving them so far in the dust that the edge of the screen catches them and exfoliates them. At the start of a match, that screen edge is generously far behind, but as players drop out, after one misplaced jump or one wide turn, the edge advances.  The window for error becomes smaller and smaller until the last two racers are fighting for screen real-estate that will shortly cease to exist.

It’s a thrilling set-up that puts your platforming skills to the test against your foes, rather than stage hazards (though spikes and blocks do exist).  Fortunately, it adds to the wrinkle a few tools to help keep you in the game. 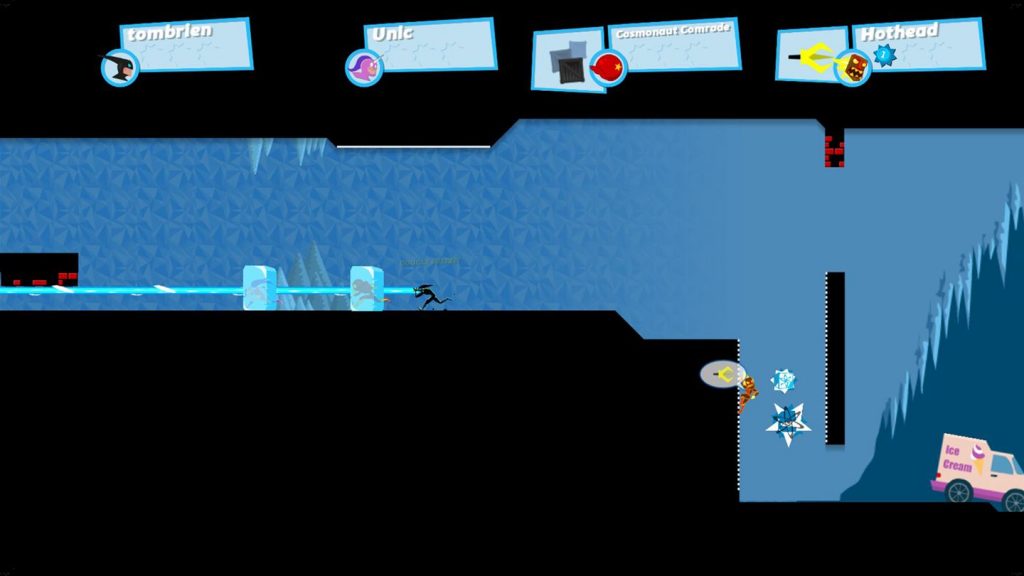 Multiple paths keep the match interesting, even after the fourth lap.  If you’re not far enough ahead, your route may be closed to you altogether by a player behind, thanks to copious switches about every stage.  A player only needs to flip one to open or close a path ahead or behind, forcing players to keep on their toes and adapt.  Knowing a switch could be hit will make you consider risks and rewards for every fork in the road, and always in the millisecond you have to make your choice.

Items can also help you keep your lead or close the gap, even if picking them often means leaving a faster route to the wayside.  A wide selection, from grapple hooks to ice beams to Mario Kart-Bullet Bill-like drills, give players falling behind a chance to stop first place in their tracks, but each one can be played around if your reactions are quick.  It’s just a matter of ducking the yellow hook, jumping over the ice beam, or choosing a different path than where the C4 is waiting for hapless stragglers. Picking yourself back up from a rocket blast with a solid counter of your own never grows tiresome, even for players who might have taken a few too many blue shells to the face in their past.

At the same time as contemplating multiple paths and leaping over obstacles sent your way from the back of the course, the leaders of the pack have another issue to contend with.  The shrinking window that reaches its tendrils from the back of the screen also comes in from the front.  While you won’t explode upon contact like those behind you, you will have to deal with an obvious handicap.  Obscured (ie: completely blocked) vision of the path ahead means that you’re working from memory far more than visual cues when the match is headed to its resolution. 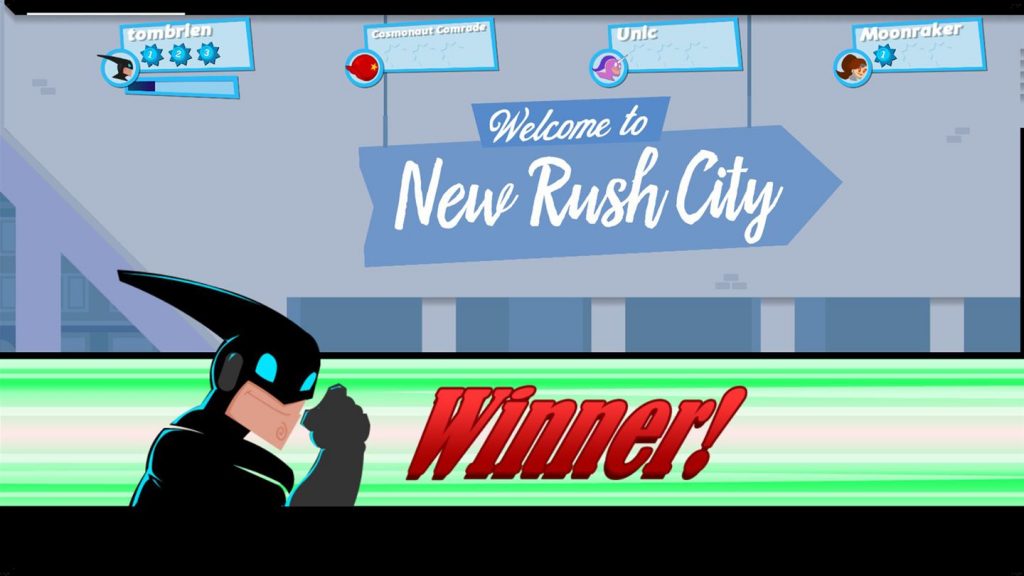 Fortunately, the cyclical nature of races and the number of rematches you and your mates will compete in means that you’ll memorize those jumps, paths, and obstacles without a problem.  It leads to longer matches, and by extension, more intense matches.  Playing to the limit of the closing screen garners hype in any setting, especially if players are tied and on the cusp of overall victory.

The key of learning the stages isn’t just which path is fastest- it’s also which parts of each map are manufactured to choke off stragglers.  Big boosts and vertical corridors (especially when combined) can create a sudden and short-lived break between pack members.  When only two racers are left, these places can end a match single-handedly, no matter how big the gap may be in the following second.  Ensuring you’re on the right side of these choke points is key to survival, made easier by a refillable boost bar.

SpeedRunners isn’t a beautiful game by any stretch of the word.  Its design is serviceable.  There’s no confusion about what obstacles are ruining your day, but there’s nothing to stop and appreciate, either.  Not that you’ll want to.  The music and sound effects align to that same purpose.

The menus are simple and quick (pressing local play will start a match on the spot, for example- you’ll have to back out to change characters or select a stage) and do their best to stay out of the way.

Which leaves, personality wise, just the selectable characters’ design and victory poses.  These are the visual highlight of the game, and range from a burly man in a pink unicorn outfit to a middle-aged man dressed as a chicken.

SpeedRunners requires players to unlock stages and characters via playing and earning experience, and while it can be earned in multiplayer, you may want to take a few hours before your local get-together to get some characters and stages.  The game also has a track (and trail) editor, which gives you another way to keep the party going, or another way to get ready (via downloading stages made for quick experience). 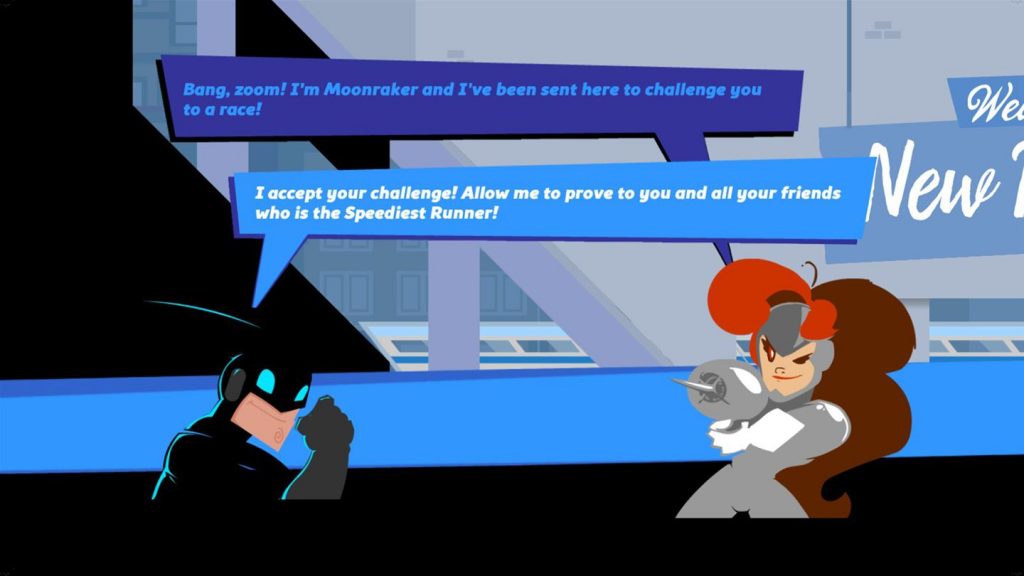 SpeedRunners is a knockout multiplayer title (especially for a local scene).  Platforming abilities will be tested.  Decision-making tried.  And despite the handicaps in place to keep matches interesting, the best player will win.  Just don’t come alone if you’re not willing to go online- chasing the best times is better done on other titles in the genre.  SpeedRunners is for chasing first place.

If you want to give the game a try, it’s currently free on Xbox One Games with Gold.  If you’ve got a local party ready, SpeedRunners may give the festivities an extra boost.

Smooth, familiar platforming puts everyone in the game. - 90%

Functional aesthetics, and no better - 70%

Multiplayer mayhem rewards the turtle, as long as it runs like the hare - 85%

If you've got friends to play with, you can't go wrong with speed-running, grappling, and sliding through tightly designed stages. Weigh risk and reward in split-seconds, or kiss the round goodbye. SpeedRunners just isn't necessarily for speed-runners looking for the next clock-chase, or for those who want form with their function.

Brutal Gamer's Nintendo Editor began his gaming life a little late- at five years old. But he's made up for it in the two decades since, gaming and writing about gaming with the same passion, fervor, and unrelenting love as his five-year old self.
Previous The Walking Dead A New Frontier – Episode 5 From The Gallows (PC) Review
Next Second Mega Man Legacy Collection on the way for consoles and PC