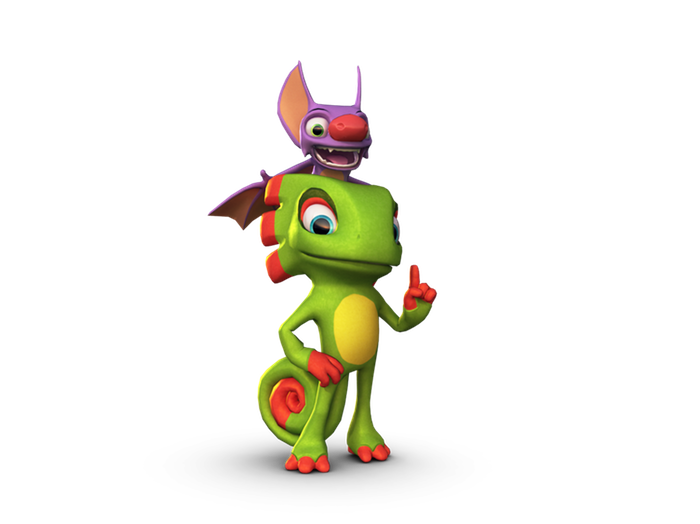 When Yooka-Laylee was announced as a spiritual successor to Banjo-Kazooie, I knew I wanted it. I didn’t realize, just how close of a successor the eventual game would end up being.

Yooka-Laylee is at times beautiful, expansive and charming. There are other times, however, when the game has strong quirks that make you scratch your head. The solid platforming is punctuated by periods of stark challenge. I spent a good deal of time with this whimsical platformer, and it hearkens back to the golden age of three dimensional platformers.

Get it? The platform? Anyway, Yooka-Laylee’s premise will look very similar to anyone who has spent any amount of time with the original Banjo-Kazooie. After seeing a cute cutscene, you take control of Yooka, a lizard boy, and Laylee,  a bat girl.

The duo controls very similar to Banjo and Kazooie, but inclusiveness sake, here is a break down. Laylee rides on Yooka’s head. Yooka can spin around, hurting enemies with his tail, and the duo can double jump. That’s the basic overview of the controls and gameplay. The entire game consists of collecting pages out of Laylee’s special book(These are called Pagies), and using them to open and expand new worlds. Including the hub world, there are six in total.

The quest to collect pagies makes the player do a number of crazy things. You might need to race a cloud, find a number of pig knights, fight bosses, scale towers and much much more. Each grand tome (world) has 25 pagies. Another thing to point out is that the worlds are incredible expansive. After collecting a few pagies, you can expand the worlds, unlocking more challenges and pagies to collect.

A problem with these huge worlds is that it can get confusing navigating the levels and finding every nook and cranny. Some might not view this as a fault, but it feels as though the worlds are intended to be unfinishable. This is a natural progression for a game in this style in 2017, though. After all, if Yooka Laylee released at the same size as Banjo Kazooie, people would have been clamoring for a larger game.

I also found the hub world to be a tad difficult to navigate. This, as above, is likely a symptom of a larger game, and isn’t necessarily a bad thing.

Here is where Yooka-Laylee truly glows.

This game controls like a dream. It is incredible satisfying to control Yooka and Laylee as they run through the world and platform to insane heights and incredible depths. Jumps feel great, attacks are responsive and concise and special moves are just plain fun to use. The special moves are kind of similar to the specials in Banjo Kazooie, but that isn’t a problem in my book.

There is never a moment when you begin to feel like you’ve been doing the same thing for too long. There are near constant breaks in gameplay to offer up variety. Some examples include riding along a rail to collect gems like in Donkey Kong Country, playing games in a casino and using stealth to escape danger.

Scattered throughout the five worlds are a few challenges that are actually very difficult. There is not much of a penalty to failing, so the tough as nails platforming gets a pass.

Each of the game’s five worlds are different enough and fun enough that exploring them for hours at a time does not get old. I just wish the obligatory ice world didn’t exist. That is less of a problem with the world, and more a problem with me despising ice worlds in all video games, though.

The camera has been brought up by a lot of other reviewers. To be completely fair, I didn’t play the game before the day one patch, so I don’t know if that changed anything. For me, the camera was totally fine. There was maybe a single instance where the camera bothered me.

There is really not much more to discuss here. Yooka and Laylee do what you want them to do. During my entire time with the game,  I didn’t have a single issue with controls or the characters not obeying my input. 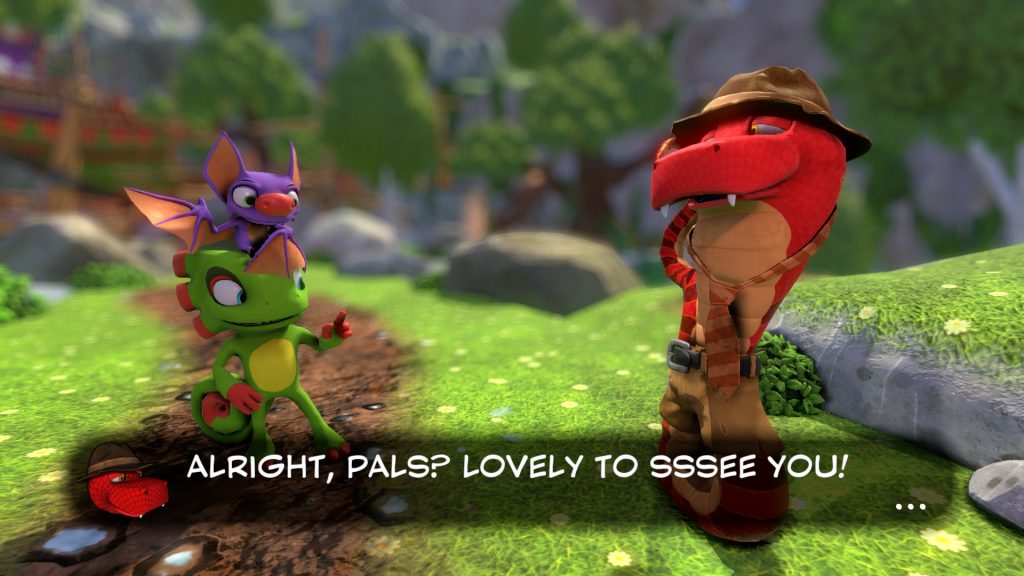 The art and music within Yooka-Laylee are pretty great.

The art is better than the music, and here is why: The music is so very similar to the original Banjo Kazooie, that I thought the music actually was the same for a split second. It is charming, but the music is so similar to the spiritual predecessors that if you played the old music over the new music, you would have a tough time telling the difference.

The art is colorful and distinct. Each world has a unique flavor, and the supporting characters all play an important role in terms of art direction.

Just as in gameplay, looking at the world of Banjo Kazooie never let me get bored.

Yooka-Laylee is a competent platformer. At times, the sheer size is daunting, but otherwise, there is plenty of great platforming action. The camera is totally bearable, and there is enough breaks in the action that you shouldn’t get bored. The large worlds do make exploration a progression a bit daunting, however.

Daunting worlds are one of the only things really holding back Yooka Laylee. Otherwise, certain challenges are tough as nails and the music is extremely similar to the original Banjo Kazooie.

Erich was introduced to gaming by his grandfather before he could walk. Since then, he has grown up loving Nintendo and most games in general. He couples his love of videogames with journalism to cover news, provide reviews and tell it how it is in the gaming world.
Previous Brutally Honest Podcast 23: Too Many Trailers?
Next Explore Talos I And Crafting In New PREY Videos