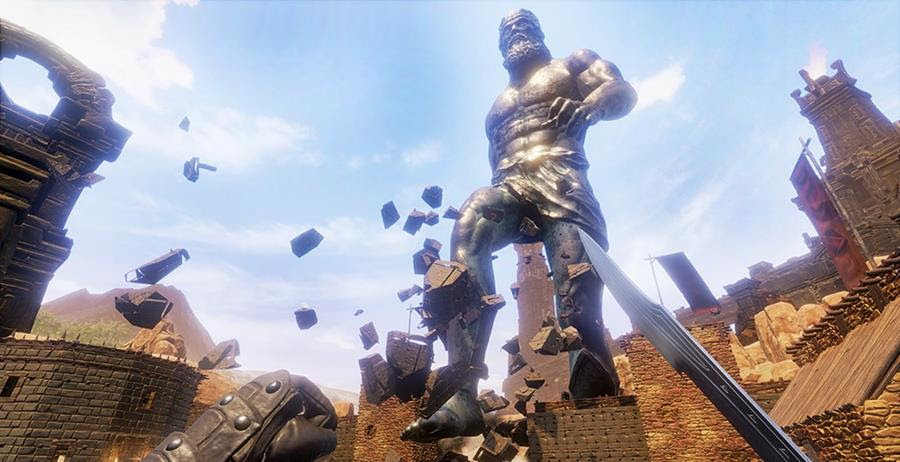 Summon up some old time religion in Conan Exiles

Yes, you can battle other players and build massive keeps in Conan exiles. But you can also summon (and play as) gods.

No really, Crom! As in, holy crap Crom’s on the battlefield!

That’s something akin to what you’ll be saying if you go up against someone who’s summoned the big guy, or any of the avatars available in Conan Exiles. Avatars aren’t the actual gods of Conan’s Hyboria by the way, they’re exactly what the name implies, avatars of the gods. Still though, you’ll get to take direct control over them and bust things up to your heart’s content. So, either way really.

“Take control of a towering god and drive your enemies before you as you crush their homes and conquer their land,” says Joel Bylos, Creative Director at Funcom. “That is the epitome of player vs. player conflict in Conan Exiles. We are giving players a huge, detailed open world where they can go out build a village, a city, or a vast empire in their name. If you are on a PvP multiplayer server, just remember there is always someone willing to take that from you!”

As a Conan fan myself, I have to say that that’s freaking awesome. Of course, there’ll be ways to counter avatars. And don’t forget that the summoner is going to be super-vulnerable while the titan is wreaking havoc; stop him/her and you’ll stop the threat.

You can also choose to play on a server that doesn’t offer the behemoths, according to Funcom. And you could always play solo too, thusly avoiding pesky ‘real humans’. Summoning looks to be the cherry on top of the cake in this game though, which looks better and better every time I see it.

Conan fans take note, Conan Exiles hits Early Access on Steam of the PC on January 31st. Waiting for the console versions? The Xbox One version will be arriving later this Spring as a part of the Game Preview system, and the PS4’s edition is still undated.

Jason's been knee deep in videogames since he was but a lad. Cutting his teeth on the pixely glory that was the Atari 2600, he's been hack'n'slashing and shoot'em'uping ever since. Mainly an FPS and action guy, Jason enjoys the occasional well crafted title from every genre.
@jason_tas
Previous Tekken 7 launch confirmed, hits this June
Next New Mass Effect Trailer Gives Us A Tour of the Tempest