The Justice League of America is back as of this January. And DC Comics will be blitzing fans with a series of one-shots starring some of the team’s newest heroes.

Justice comes in all forms

Not all of the heroes in this lineup of four special issues are new to DC fans. What is though, is that they are all getting their shot at the limelight in a while. I mean, when was the last time that The Atom was a headliner in anything? How about The Ray? Right, it’s been a while. And for characters like Killer Frost and Vixen, well they’ve never had a solo title, not even a one-shot.

That’s all about to change though, as DC ramps into Justice League of America this winter. 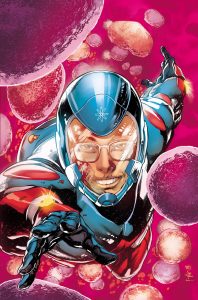 The JUSTICE LEAGUE OF AMERICA is back—just when we need it most!
Foes of evil! Enemies of injustice! As it began in DC UNIVERSE: REBIRTH, for the mighty heroes of the Justice League of America, all wrongdoing is a menace to be stamped out! Whether it comes from outer space, from the watery depths of the seven seas, or springs from the minds of men, the JUSTICE LEAGUE OF AMERICA is back—just when we need it most!
In January 2017, kicking off JUSTICE LEAGUE OF AMERICA (hitting shelves twice monthly starting February 2017) are four DC Rebirth one-shots. They make four bold statements that form the foundation of a team that will bring justice to places that have given up on hope; places that thought heroism would never find them. The Justice League of America goes there! They explore the Microverse, the Hidden Cities, the worlds within worlds; they go to the other side of the map and explode forward with the new face of Heroism.
This is a Justice League that looks like America, that proves Heroism can look like ANYTHING and ANYONE.
From February 1960 to February 2017. The mission hasn’t changed. It’s just evolved.

Who’s on the roster so far?

THE ATOM. Meet Ryan Choi, prodigious theoretical physics student, hyper-allergic, and crippling social anxiety sufferer. But little does young Ryan know, his first day at Ivy University will begin an epic journey that will take the all-new Atom into the very heart of the DC Universe.
VIXEN. She’s one of the country’s most successful businesswomen, an iconic fashion pioneer, a crusader for social justice, and an incredibly powerful member of the Justice League of America. But Mari McCabe life wasn’t always this way. Follow her path to becoming the heroic Vixen in this crucial special!
THE RAY. Locked indoors, raised in the dark, and told his medical condition could be fatal to himself and anyone he meets, Ray Terrill is dangerous. A freak. Broken. Or is he…? Witness the amazing power of realizing your true self and
stepping into the light in this moving DC Rebirth of a long lost hero for a new generation. 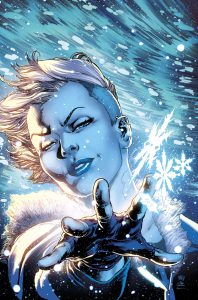 KILLER FROST. What happens to a supervillain on their last day in Belle Reve Prison? Against all odds, Killer Frost is up for parole from the Suicide Squad, but you can bet Amanda Waller isn’t going to make it easy for Frost to take her
place on the new JLA.
These four will be joined by more team members! DC isn’t done stocking the JLA roster. More heroic DC leaders, more of the characters you love, and maybe a few out-of-this-world surprises will follow these four to the pages of JUSTICE LEAGUE OF AMERICA in February. Stay tuned!

JLA members lost, and all together new

Frost is probably the most interesting of the bunch here, since she’s always been a villain. Suicide Squad service notwithstanding, it’ll be weird to see her actually fighting alongside the superheroes of the DCU. For Vixen, it’s about time that she got a starring role in a Justice League book again. She was last on the team in the 80s/early 90s if I remember correctly. The Ray has had a solo book all to himself before, though this new version seems quite a bit different than his last incarnation.

And Atom? I’d be lying if I said I wasn’t hoping for Ray Palmer to make his return to action, though I’ll take Ryan too. It’s just good to see an Atom making a splash again as a part of the team.

I’m sure though, that you can imagine that this is far from being the whole team. DC says that there will be more news on the remaining members as of this coming Thursday, at NYCC. The DC All Access panel ( Thursday, October 6 from 1:45-2:45PMEastern time) will be the place to catch the latest on that front. And of course, if you’re not able to be there, we’ll have more for you here on BG too.

As for what you can definitely look forward to in January though, here’s what the lineup of one-shots looks like:

Jason's been knee deep in videogames since he was but a lad. Cutting his teeth on the pixely glory that was the Atari 2600, he's been hack'n'slashing and shoot'em'uping ever since. Mainly an FPS and action guy, Jason enjoys the occasional well crafted title from every genre.
@jason_tas
Previous Hyper X announces sub-$50 headset
Next More Features Incoming For Injustice 2