Wonder Woman #8 won’t star the amazing Amazon, but will instead spotlight one of her arch nemesis’ Barbara Ann Minerva – The Cheetah.

Wonder Woman #8 is going to be pretty different from what you’ve come to expect. The reason for that of course, is that we’re getting a one-off Cheetah story. Well not really Cheetah, as she’s not all fuzzy and catlike just yet in this tale. Nope, this is Barbara Ann Minerva before she became the feral villain.

Authors Greg Rucka and Nicola Scott will be telling a story that retells the origin of the character. It’s about time too. Despite being one of the biggest WW baddies, Cheetah has been severely neglected in recent years. It is good timing though, with her being a bigger part of the Wonder Woman book here in the Rebirth era.

“The ‘interlude’ issue arose very organically out of the stories we’ve been telling in both Year One with Nicola Scott, and The Lies, with Liam Sharp,” said Rucka. “The opportunity to focus on Cheetah, on the origins of Barbara Ann Minerva, is one of those decisions that I think is going to add even more to what we’re doing.” 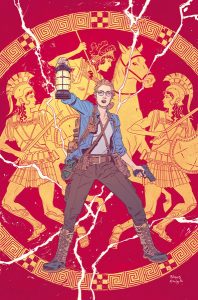 “This story is very thoughtful and human,” said Evely, “and I’m trying to bring this to the pages as well. We visit a lot of different places and archaeological reference points, which means I get to have a lot of fun! I think the readers will never see Barbara Ann in the same way again, after what Greg has been doing here! This is a singular opportunity I couldn’t pass up.”

A guest artist brings the throwback tale to life

Heard of Bilquis Evely? An up and coming artist, she currently works on Sugar and Spike at DC and is making quite the impression in the comic world. As you can see from the image on this page, there’s a reason for that.

She makes Minerva look almost Indiana Jones-ish, which is a very cool track indeed for her. As for Greg Rucka, he was all kinds of excited to get the artist working on Wonder Woman.

“The fact that we’ve got Bilquis Evely drawing this issue just makes this all the sweeter,” continued Rucka. “I am such a fan, and her work is so consistently wonderful—everything from her characterization to her linework to her laser-sharp storytelling. So when her name came up, I pretty much fell over myself saying yes. One of the greatest joys about working on Wonder Woman has been the privilege of working with such tremendous collaborators, everyone from Laura Martin and Romulo Fajardo Jr to Jodi Wynne to the entire editorial team and, of course, Nic, Liam, and now Bilquis. I’m really hoping people will enjoy this issue as much as we do.”

Jason's been knee deep in videogames since he was but a lad. Cutting his teeth on the pixely glory that was the Atari 2600, he's been hack'n'slashing and shoot'em'uping ever since. Mainly an FPS and action guy, Jason enjoys the occasional well crafted title from every genre.
@jason_tas
Previous Get me… Solo #1 (Comics) Preview
Next NHL 17 hits the ice on consoles