Home / Comics / Agents of S.H.I.E.L.D.’s Grant Ward is back, and super-powered

Agents of S.H.I.E.L.D.’s Grant Ward is back, and super-powered

In a story broken by Nerdist today, the former SHIELD agent Grant Ward has returned to Marvel’s Agents of S.H.I.E.L.D., but as a super-villain straight from the comics. Warning: Spoilers abound. 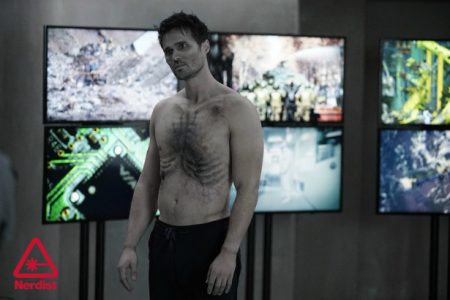 Well, maybe not straight from the comics, as Ward’s new identity is a bit different in both form and power-set, but he’s Hive alright. Yup, the Hydra baddie that you might (or might not) know from the Secret Warriors arc, which involved SHIELD heavily, is now a part of Agents of S.H.I.E.L.D.

Personally, I had no idea who this was, so I looked him/it up on the Marvel Wikia. And you know what? Hive is pretty interesting. Thought up and created as a parasitic entity by Hydra scientists and Baron Von Strucker, Hive is an amalgam of a bunch of individual creatures, which possess a human host. The character has a pretty wide range of abilities too, not the least of which includes being able to fire off parts of himself for use as weapons. And the of course he can also revive the dead. So there’s that too. Might come in handy.

None of this is guaranteed to be in the show though, as the producers say that the character “is going to have its own unique twist and be very different from what fans have seen so far.” They also add that there’ll be homages to the comics in this version though, so he should be somewhat similar I’m guessing.

Here’s the announcement, as it appeared on Nerdist:Marvel Confirms Grant Ward is [SPOILER] on AGENTS OF SHIELD (Exclusive)

Image and video courtesy of Nerdist

Jason's been knee deep in videogames since he was but a lad. Cutting his teeth on the pixely glory that was the Atari 2600, he's been hack'n'slashing and shoot'em'uping ever since. Mainly an FPS and action guy, Jason enjoys the occasional well crafted title from every genre.
@jason_tas
Previous The Walking Dead Recap: 611 ” Knots Untie”
Next Nis’ The Witch and the Hundred Knight: Revival Edition hits retail