You’ve probably already seen this magical second look at Warner Bros third big screen DC Comics ‘Universe’ film. Then again, it’s also probably been a few days since you watched it last, and really, isn’t it worth another viewing?

As someone who loved the first trailer, which was way darker and more ‘serious’, I think I love this one almost as much- maybe more. There’s some awesome mojo being worked here by director David Ayers. It seems like he’s creating a film that combines the genuine darkness that the Suicide Squad IP demands with the mirthful-mayhem and happy lunacy that results from seeing all this actually play out live and in living color.

Jared Leto’s Joker looks freaking fantastic (that ‘laughing’ scene with the knives is magic) and it sure looks like all the various components of the Squad come together nicely. I’d keep my eye on actor Jai Courtney’s Boomerang too. I have no idea what the future holds for the character, but there are more than a few outlets and fans saying that he kind of stole the trailer for them, and I think I agree.

Quite frankly, this one’s gone from being the third or fourth movie that I’m looking forward to this year to being right there with BvS and Civil War, and we don’t even know who the villain is yet (though I assume it’s Common’s Tattooed Man). Oh, and this poster is so awesome that I’m going to run it right here under this story. Yes, it looks out of place there, and no it doesn’t fit into the layout at all, but it’s just so great… 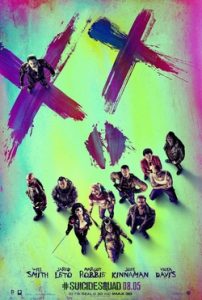 Jason's been knee deep in videogames since he was but a lad. Cutting his teeth on the pixely glory that was the Atari 2600, he's been hack'n'slashing and shoot'em'uping ever since. Mainly an FPS and action guy, Jason enjoys the occasional well crafted title from every genre.
@jason_tas
Previous The art of horror, Layers of Fear arrives next month
Next Sega’s 3D Classics for 3DS get a physical release, complete with 4 new games