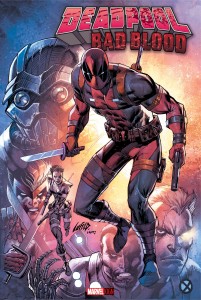 Shooting, stabbing and otherwise annoying his way across the Marvel Universe has made Deadpool scores of enemies over the years. Even though his sordid past contains countless unfriendly faces, there is one he can’t quite place. A brutal new foe known only as Thumper. Outgunned, outmatched, and outclassed by this new foe, Wade’s gotten his rear end handed to him on more than one occasion. But who is Thumper? And what is Deadpool’s past connection to this powerful new baddie?

“The idea that you can tell one consecutive story un-interrupted is unique nowadays,” says Rob Liefeld, discussing his upcoming OGN with ComicBook.com. “No single issue breaks and cliff hangers allow for greater momentum building the tale. The format has tremendous storytelling opportunities. I’m having a blast as are Chad and Chris.”

Wade’s journey to uncover the truth and escape Thumper’s crosshairs will take him across the Marvel Universe and into the path of many familiar faces. Cable! Domino! Shatterstar! Star-Lord! And more! Blood will be shed. Old scores will be settled. Deadly twists and turns await as Wade Wilson faces one of his greatest challenges yet. Be there for the fireworks as Liefeld, Sims and Bowers bring you Deadpool: Bad Blood in 2016!

I’m not really sure where Star-Lord fits into this one, but man it’s plenty cool to see Liefeld back behind the art for a book with so many of the classic X-Force characters in it. He created most (if not all) of these guys and gals after all, and his run to kick off the book back in the early 90s was loaded up with big moments, and (IMO) some of the coolest stuff in the history of Marvel’s mutant-verse.

And with the team from X-Men ’92 on board too, this should be a pretty terrific book. You’ll be able to grab a copy when it lands on the shelves some time in 2016.

Jason's been knee deep in videogames since he was but a lad. Cutting his teeth on the pixely glory that was the Atari 2600, he's been hack'n'slashing and shoot'em'uping ever since. Mainly an FPS and action guy, Jason enjoys the occasional well crafted title from every genre.
@jason_tas
Previous Stow your cards and cash in Mad style with this Harley Quinn wristlet
Next Warhammer 40k goes MOBA with Dark Nexus: Arena