IDW launches into ECCC this weekend with guests and exclusives

Emerald City Comic Con is this coming weekend and IDW Publishing will be there en force, with plenty of special guests, panel presentations, and a special exclusive variant edition of Jem and the Holograms that you’re not going to want to miss. 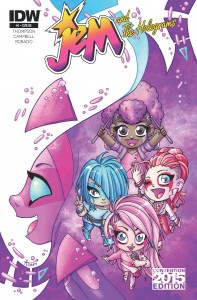 Jem has been making something of a buzz in the comics world, and for good reason as the cartoon series that was so massively popular in the 80s hasn’t seen the light of day in years. Now with the new ongoing comic, IDW has reawakened a fan base that’s ever so slightly rabid for new merch. San as that goes, a limited edition, Comic Con exclusive cover certainly fits the bill. The book will cost you $5.00 USD and will only be found at the IDW booth on the show floor.

Even if you’re not a Jem aficionado though, there’s plenty to like from IDW at ECCC in Seattle. If titles like Orphan Black, Samurai Jack, Powerpuff Girls, Teenage Mutant Ninja Turtles, Judge Dredd, G.I. Joe, and Transformers are your speed, then you’re going to want to check out some of the panels and signings that the company will be putting on.

All of the below will be taking place during the Con’s run, which will be this Friday, March 27th, through Sunday the 31st.

And don’t miss out on the panels that are sure to be a highlight of your weekend!

Saturday, 2:00 – 3:00 Room Hall C (TCC 301)
God is Disappointed in You (The Sequel), with Mark Russell & Shannon Wheeler—Last year’s standing-room-only hot ticket returns — now with even more Biblical bewilderment! God Is Disappointed in You, published by Top Shelf, is the tongue-in-cheek “condensed” version of the Bible you never knew you needed — hilariously modern, but surprisingly authentic — packed with cartoons by Eisner-award-winner Shannon Wheeler (The New Yorker, Too Much Coffee Man). Join him and author Mark Russell (writer of DC Comics’ upcoming Prez) for an hour of unforgettable irreverence, including Q&A, audience sketches, and the hilarious-yet-accurate “ten-minute Bible.” PLUS: a taste of the Audie-nominated audiobook, read by Dr. Venture himself, James Urbaniak (The Venture Bros), and an exclusive announcement about the upcoming sequel!

Sunday, 3:30 – 4:20 Hall F (TCC 304)
Kevin Eastman: A Life With Turtles—Join the legendary co-creator of the Teenage Mutant Ninja Turtles and he talks about his long career in both comics and Hollywood, and how he brings his beloved Turtles to the world in a variety of media!

Sunday, 4:00 – 5:00 Room Hall C (TCC 301)
IDW Presents: The New Class of Licensed Comics—Transformers, Adventure Time, Star Trek, Orphan Black, My Little Pony: Friendship is Magic… What do these comics all have in common? They’re all licensed comics, and although some may STILL look down on them, they’re also home to some of the best talent telling the best stories around. Come hear about the good (and the sometimes challenging) aspects of working on books like these, from host Editor Sarah Gaydos (Star Trek, Disney, Edward Scissorhands), with special guests Kate Leth (Bravest Warriors, Edward Scissorhands), Corinna Bechko (Star Wars, Planet of the Apes, Once Upon a Time), Jody Houser (Orphan Black), Editor Shannon Waters (of BOOM!), Chris Roberson (Aliens, Star Trek), and Gabriel Hardman (Planet of the Apes, Star Wars).

Jason's been knee deep in videogames since he was but a lad. Cutting his teeth on the pixely glory that was the Atari 2600, he's been hack'n'slashing and shoot'em'uping ever since. Mainly an FPS and action guy, Jason enjoys the occasional well crafted title from every genre.
@jason_tas
Previous LA Cops (Xbox One) Review
Next Dark Horse’s Avatar tome hits #1 on the NYT bestsellers list