Home / Comics / Wolverines brings together the friends and foes of Lgan

Wolverines brings together the friends and foes of Lgan

Wolvie might be ‘dead and gone’, but there are plenty of shadows left behind that the character has cast on allies and enemies both- and that’s focus of the new Wolverines monthly. 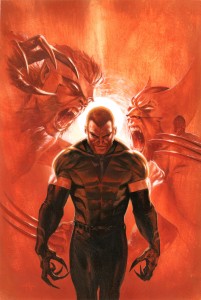 “In a way, most of the characters featured in [Wolverines] are incomplete reflections of Wolverine,” says co-writer Ray Fawkes in an interview with Marvel.com “Perhaps now that he’s gone, they are free to fully realize themselves? Or maybe they’ll be annihilated by the void that he’s left behind?”

Kind of an odd title, Wolverines is an amalgam of heroes and villains (and some in-between) who normally might be at each others throats, but have otherwise sort of come together to look into the death of Logan. Marvel is teasing that there’s still a bigger threat,  a greater enemy who’s out there lurking in the Marvel U somewhere. To stop him/her, it’s going to take all of the stars of Wolverines (“X-23, Daken, Sabretooth, Mystque, Lady Deathstrike and more”) to find and stop them.

Unfortunately, that’s not really something that this diverse lot of characters finds… easy.

“The group here is not a set of people who are particularly interested in doing anything together unless they absolutely have to,” says Charles Soule.

Wolverines #1 hits the racks to kick off the New Year this January from Marvel Comics and the team of Charles Soule and Ray Fawkes.

Jason's been knee deep in videogames since he was but a lad. Cutting his teeth on the pixely glory that was the Atari 2600, he's been hack'n'slashing and shoot'em'uping ever since. Mainly an FPS and action guy, Jason enjoys the occasional well crafted title from every genre.
@jason_tas
Previous Halo: The Master Chief Collection to have day one, 20GB content DLC
Next Alien Isolation (Xbox One) Review