So here goes….Let’s review the scariest demo I’ve ever played, or anyone I know has played, and quite possibly, ever made. (Spoiler Alert!!!) 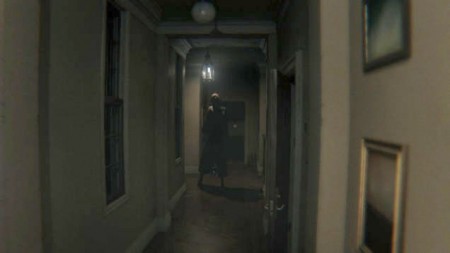 From the great Hideo Kojima, king of Silent Hill, and the incredible film director Guillermo Del Toro, comes this haunting and terrifying demo for the latest (and upcoming) Silent Hill game.  This short is somewhat Indie in styling, and as it’s played from a first-person viewpoint, it brakes away from the norm when it comes to the SH franchise.

Beginning the game you are alone in a dark room, centred and with nothing at all in the room but a door way out. You will then proceed to enter a hallway, with your usual household things found; disturbing paintings, old photos, empty beer cans and bottles, an off the hook phone, and a few potted plants.

To progress through out the game, which in fact does have progression (although at first it doesn’t seem like it), you will need to complete a series of tasks, or puzzles. The only problem is, you do not know what these puzzles are or even the fact you have to complete them, leading to a few hours of endless hallways and you repeatedly asking yourself, ‘What the hell am I doing…’.

Graphically this demo is insanely realistic. Even walking gives a sort of camera sway that makes you, the player, feel as though these hallways are your own and like you’re really there in this creepy old house. As the eerie music sets in, and the ghostly noises and radio static start, the hairs on the back of your neck will stand up.

Every flicker of light, every creak and bang, make for intense scares, much better than any plain old jump scare as seen in countless other games. This game (and it’s really just a demo after all) could quite easily give any horror film a run for it’s money. I will even admit that a few scenes did disturb me to the point I had stop for a break. There’s some truly disturbing stuff here, including the images of **SPOILER** a foetus in the bathroom sink.

Do be aware that this demo has been given a health and safety warning, and a justifiable one at that.

“Avoid playing if you have a heart condition.”

Although the writers have stated this story has no connection to the full game itself, I found myself naturally drawn in to the history behind these hallways, and what happened in this home. If you however, don’t find yourself pulled in, you may find it very tricky to progress to the true ending of the demo.

One of  the most frustrating puzzles going; making the baby laugh, has been talked about on-line for a few days now. It really is as difficult as people say. Without making the ‘baby’ laugh, you can not accept the phone call allowing you to view the **SPOILER** teaser for the new Silent Hills (intentional ‘s’) game itself, featuring none other than The Walking Dead’s Norman Reedus.

The teaser sees Reedus  strolling down a street, a somewhat American looking one, in the night. Lampposts lit and no one around, Reedus looks behind him revealing his face to the camera. The screen then cuts to white, not the average black, and the infamous harpsichord kicks in… And there you have it, Silent Hills.

Initially, I honestly did not want to play this, I was scared. And with good reason. So I watched a few YouTube videos and realized I needed to experience this demo to appreciate the hard work and pure insanity that has gone into it.

I will admit to being terrified, and I admit I found this demo extremely tricky to work out, with literally no guidance, it is not easy at all. I did however manage to complete it in one sitting, including a small (10 minute) break. If you have an idea what your doing, this demo is one you will fly through, but if you have no clue, this could easily keep you going till the big autumn releases. Definitely worth a go, Silent Hill fan or not, but not one for the faint hearted.

*If you do have trouble there are many sites with a walk-through already, and hints to help you out. As for this review, it’s as spoiler free as I could make it.

One of BG's UK contributors and a PlayStation super-fan, Kiri is self-described as "super competitive" and can be most often found shouting at her other half "kicking my butt on Injustice".
Previous The Walking Dead Season 2 finale coming next week
Next The All-New X-Men meet up with Ultimate Spidey