Often linked together, Hulk and Iron Man are about to find out that they have some pretty significant history together. 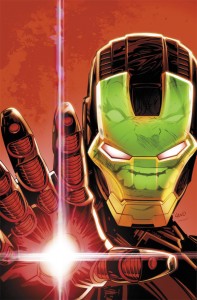 This June, Original Sin continues to send shockwaves through the Marvel Universe as two of Earth’s Mightiest clash in a battle for the ages – and neither will walk away the same, if at all! Today, Marvel is proud to present your very first look at HULK VS. IRON MAN #1, the first issue in a 4-part crossover that pits the Green Goliath against the Armored Avenger with personal stakes and gut-wrenching revelations.

Superstar writers Mark Waid & Kieron Gillen join blockbuster artists Mark Bagley and Luke Ross for a gamma-bomb sized collision. The events of Original Sin have released the greatest secrets of the Marvel Universe. And Bruce Banner is about to learn a secret that’s stayed buried for a long time. A secret that goes back to that fateful day that gamma radiation turned man into monster:

Was Tony Stark responsible for creating the Incredible Hulk?

“How badly does Hulk take this news?” asks writer Mark Waid in an interview with Marvel.com. “The answer should surprise no one.”

“People have been digging the love/hate relationship between Marvel’s polar opposite geniuses both on screen and in the comics,” says Senior Editor Mark Paniccia. “[Mark and Kieron] are delving into some really compelling history with Tony and Bruce…some very cool dots will get connected and you’ll see one of the best superhero fights in history.”

Bruce Banner and Tony Stark are in for an emotional rollercoaster thanks to the events of Original Sin. The secret history of that fateful day stands revealed, and it’s about to set Hulk and Iron Man on a deadly collision course. When the dust settles – who will be left standing? Find out when the two Avengers go toe-to-toe this June in HULK VS. IRON MAN #1 – an Original Sin tie-in!

I don’t really know why Bruce Banner and Tony Stark have been linked almost since their creation and entry into the Marvel U, but they sure have. And that relationship has only been becoming more and more plain as of late, even to the end of being paired up on screen in the Marvel Cinematic Universe as dueling scientists in the Avengers. Whatever the reason for that though, all that camaraderie might very well be coming to an end thanks to the fallout from Original Sin.

That event (which has unleashed all sorts of nasty little secrets) is still very much raging, so it’s unclear what the future will hold for both characters mentioned here and the rest of the Marvel U. I think it’s probably pretty safe to say though, that there won’t be any sharing of blueberries going on any time soon.

See what happens when monster meets metal in Hulk vs Iron Man #1 (of 4) lands on the racks on June 25th.

Jason's been knee deep in videogames since he was but a lad. Cutting his teeth on the pixely glory that was the Atari 2600, he's been hack'n'slashing and shoot'em'uping ever since. Mainly an FPS and action guy, Jason enjoys the occasional well crafted title from every genre.
@jason_tas
Previous X-Men: Days of Future Past (Movie) Review
Next Time’s up for the Avengers and New Avengers this September