The Blue Marvel and others remember the murdered cosmic being who watched over the Earth while Blade fights for his life against the threat of the Deathwalkers. 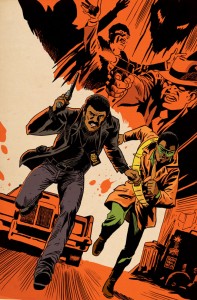 This May, the Blue Marvel grieves for the passing of The Watcher in MIGHTY AVENGERS #10 – a tie-in to Original Sin! From the fan-favorite creative team of Al Ewing and Greg Land – the Watcher has many enemies, some that would go so far as to murder him in cold blood. But he also has friends. On the moon, Adam Brashear honors the memory of one of his dearest friends and the gaping hole he leaves behind in the Marvel Universe. And a chance encounter with an old flame from Uatu’s past will reveal startling secrets the Blue Marvel never knew about the cosmic entity!

On Earth, the ghostly Deathwalkers have risen, stronger than ever. Closing in for the kill, Blade fights for his life against hordes of supernatural foes. But his best may not be enough. And the secret to defeating them may lie in a secret that’s better left buried. Don’t miss the explosive start to the story that will turn the Mighty Avengers on their heads when they crash headlong into Original Sin this May inMIGHTY AVENGERS #10!

There are a ton of crossovers into the Original Sin event, where the Watcher gets murdered, but few that have the kind of personal feel that Mighty Avengers #10 is set to have. The issue isn’t about the revelation of a ‘Sin’ that we’ll be seeing in so many other books, but is instead a remembrance of the entity and how characters like the Blue Marvel and other friends of Uatu, and how they’re dealing with his death.

That’s only half the book though since the other section features Blade and the lethal Deathwalkers. It looks like the Original Sin secret-telling might be something of an influence here as there’s a secret that’ll put down the monsters, but it might not be one that Blade cares to discover. Find out what it is and how deep the loss of the Watcher is felt by the team when Mighty Avengers #10  lands on the racks on May 28th from the team of Al Ewing and Greg Land.

Jason's been knee deep in videogames since he was but a lad. Cutting his teeth on the pixely glory that was the Atari 2600, he's been hack'n'slashing and shoot'em'uping ever since. Mainly an FPS and action guy, Jason enjoys the occasional well crafted title from every genre.
@jason_tas
Previous Take a pic with the Stay Puft Marshmallow Man, win some awesome prizes
Next Serious Sam Classics: Revolution loads up onto Steam Early Access

If you love side-scrolling action, you’re going to want to check this one out. Dead …