Crytek’s game about the Roman Legion finally sees release as a launch game for the Xbox One- and is more fun than it probably has a right to be. 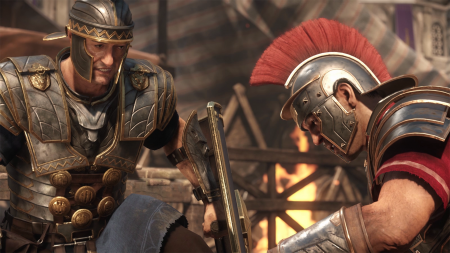 I first played Ryse at the San Diego Comic Con last July and right from the opening moments of the amphibious landing on the beaches of what would become the UK, I was pretty impressed with what I saw. Originally, that was as far from the case as you could imagine as, although I’m something of a Roman history buff, I just couldn’t get excited about the oft delayed title.

Getting overly excited about it as a launch game for the next Xbox just wasn’t something that I thought would happen. In the end though, I’m more than happy to have been wrong about that feeling- because even though it isn’t exactly Game of the Year material, Ryse is actually a pretty terrific little hack ‘n’ slash.

Ryse’s storyline is something of a rollercoaster ride through the ancient Empire. Set mostly during the time of Nero; Ryse’s Rome isn’t in such great shape. The debauched emperor is running the once great world power into the ground and corruption is rampant. Just how pervasive the illegality has become is actually a common theme and really digs in a little more than halfway through the narrative, which is quite good by the way. 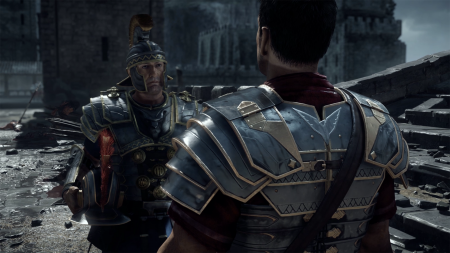 The story jumps from Rome to Briton and back as you play as legionnaire Marius. You follow Marius as he rises in rank and slowly uncovers secrets to his and his family’s misfortune that’s set up right at the start of the game. There is also more than one major twist to the plot line, which I won’t spoil here except to say that vengeance and bloody battles are the norm in Ryse. There’s a mystical element to the tale as well, which I didn’t get from any of the previews or trailers for the game. It’s definitely not unwelcome and adds a lot to the story, but it kind of came out of left field (for me anyway).

Not only is the writing solid and filled with twists and turns, but Ryse also sports a top notch voice cast. Sebastian Albineri, Jamie Ballard and others all do a great job with the dialog which is perfectly fitting to the theme. The Legionaries actually sound like Roman soldiers and the Emperor’s sons (both of which are villains in the game) actually sound like the arrogant fools you’d expect them to be under a father and leader like Nero.

Just as impressive and helping to bring the characters to life on the screen are the graphics. The CryEngine 3 is in fine form in Ryse and actually makes the game one of the most (if not the most) visually impressive titles on any currently available piece of hardware. Yes, it’s that good.

There are a few rough spots where you can definitely tell that this is a first-gen game, but Ryse shines like a Centurion’s shield almost all the way through. The architecture on both the Roman and Briton structures is downright beautiful and the lush outdoor areas are stunning. Likewise, the character models (even though many of the enemies repeat almost a bit too much for my liking) are sharp and impressive with a stunning amount of detail and little graphical niceties and flourishes. 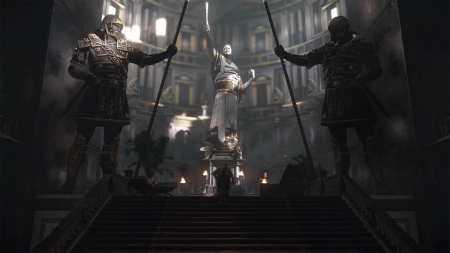 Control in Ryse is deceptively simple and the finishing moves are super-easy to pull off too. After sufficiently bludgeoning your foes with a series of quick and heavy attacks as well as shield bashes, a simple series of quicktime button presses pops up. Hit the right buttons and Marius cuts down the bad guys in spectacular fashion. Even if you don’t hit the right buttons, you’ll still slice and dice ’em- and this goes for multiple enemies as well and works similar to the Batman: Arkham series. Only with swords instead of bare fists.

You’ll also upgrade your stats as you go through the adventure, using both points that you’ve accrued and cash that you can gather as you progress through the multiplayer mode that plunks you and a co-op buddy into the colosseum for some good old fashioned gladiatorial combat.

Most of the bumps that you can earn are somewhat ‘meh’ unfortunately and never really seem to make much of a difference in your actual play. It’s not like you’re earning attacks and different weapons either- everything is a passive addition to Marius’ character and not stuff that you can actually activate in the heat of battle. I found this pretty disappointing as I was initially excited that Ryse: Son of Rome actually had some more depth than a standard hack’n slash. no such luck though.

As launch games go, Ryse was a solid offering and even here, several months after the release of the Xbox One, it stands out as a very enjoyable title.

It definitely isn’t the masterpiece and deep vision of the Roman wars in Briton that I was expecting or hoping for, but it is definitely a lot of fun to play. The graphics are great, the control is terrific and easy to get into and the story is surprisingly good. It won’t take you all that long to play through, but Ryse: Son of Rome is definitely a good time while it lasts.

Jason's been knee deep in videogames since he was but a lad. Cutting his teeth on the pixely glory that was the Atari 2600, he's been hack'n'slashing and shoot'em'uping ever since. Mainly an FPS and action guy, Jason enjoys the occasional well crafted title from every genre.
@jason_tas
Previous Toy Fair ’14: Icon Heroes shows off He-Man statuary and more
Next Batman: Arkham Origins Blackgate HD announced for consoles and PC