Publisher IDW’s series of micro-comic ‘fun packs’ continues with a series based not he Teenage Mutant Ninja Turtles. 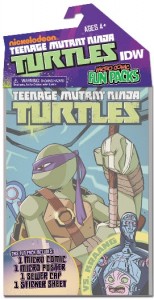 “TMNT is always non-stop fun. Including them in Micro Comic Fun Packs makes perfect sense, as now these exciting adventures can find a whole new audience.” said Teenage Mutant Ninja Turtles editor, Bobby Curnow. “Add in a bunch of great bonus material and it’s the perfect package for any fan, young and old, of the Nickelodeon Turtles.”

The Ninja Turtles have been around since the ’80s and have seen a few reinventions over the years. The most current, which is still running and only gaining in popularity, is the nickelodeon retelling of the famous tale. Surprisingly a little more mature than the classic cartoon, the show has captured the attention of kids and older audiences who remember the first show alike.

Also pretty popular these days are the micro-comic fun packs from IDW. The comic book publisher has been on a roll with the line which includes a ton of goodies for your cash. In each pack you’ll find a 22 page comic that’s a stand-alone story and has been “re-formatted” to fit the reduced size from a stand comic format. The little comics also have a special two-page spread in the center that’s made to frame the included (and removable) Ninja Turtles sticker.

And if that’s not enough for you, you’ll also get a three-page ‘how to’ guide for aspiring pencilers that gives seem tips on how to draw the Turtles, one of eight fold-out posters and a ‘sewer cap’ which features TMNT character art under a manhole cover.

“These books are the perfect fit for the Micro Comic Fun Pack line. Each one’s a complete Turtle adventure,” said IDW’s Director of New Business, Jerry Bennington. “It’s great to be able to expand the line from our current My Little Pony Fun Packs to a great series like Teenage Mutant Ninja Turtles. These comics feel like watching an episode of the TV show; each one is its own perfect little ninja adventure, and the fans are going to flip over all the extras in each pack!”

No, it’s not an April Fool, the TMNT Micro Comic Fun Packs will be hitting local comic shops, Toys R Us’ and Target stores on April 1st.

Jason's been knee deep in videogames since he was but a lad. Cutting his teeth on the pixely glory that was the Atari 2600, he's been hack'n'slashing and shoot'em'uping ever since. Mainly an FPS and action guy, Jason enjoys the occasional well crafted title from every genre.
@jason_tas
Previous Burial at Sea episode 2 officially dated for March
Next Sega reveals Sonic Boom trailer