It’s goblins, goblins and more goblins as the Goblin Nation story arc kicks off in the pages of Superior. 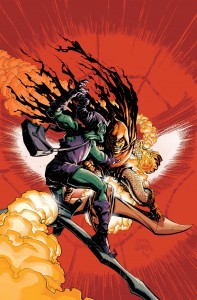 The stage is set for the biggest Superior Spider-Man story of them all! And it starts right here in the Earth-shattering SUPERIOR SPIDER-MAN #26, from blockbuster creators Dan Slott, Humberto Ramos, Javier Rodriguez, and Marcos Martin! Nobody has pushed Peter Parker harder than the Green Goblin. But as Spider-Man’s greatest nemesis returns, will Otto Octavius be able to withstand the onslaught? Moving in the shadows, the Goblin and his army have prepared for war right under his very nose! And the first battle is upon them as the Green Goblin goes glider-to-glider with the original Hobgoblin! And only one of them is walking away…

Questions will be answered this January as the opening shot of Goblin Nation is fired in SUPERIOR SPIDER-MAN #26. Trust us, you won’t want to miss this one!

Both the Green Goblin and Hobgoblin are absolute classic villains in any conversation, when you’re talking Spidey’s rogues gallery though- they’re both at the top. And while I personally might still not be sold on the whole brain-switcheroo thing in current Spider-Man lore, it’s hard even for me not to want to see what happens when the two gliding baddies go head-to-head.

Of course, it doesn’t hurt that there’s a pretty terrific team of talent behind the book either. Slott has done a masterful job so far building a case for the villain turned ‘hero’ Doc Ock in Peter Parker’s body, even for folks like me who are still very much counting the days till the real Pete returns. And as for Humberto Ramos, there isn’t much that has to be said as the artist has owned the character and his universe for some time now and become quite the fan favorite.

Catch what happens in Superior Spider-Man #26 when it hits the stands from Marvel Comics on January 29th.

Jason's been knee deep in videogames since he was but a lad. Cutting his teeth on the pixely glory that was the Atari 2600, he's been hack'n'slashing and shoot'em'uping ever since. Mainly an FPS and action guy, Jason enjoys the occasional well crafted title from every genre.
@jason_tas
Previous Activision Marvel-branded games vanish from digital storefronts
Next CES14: Maingear announces new Steambox