The Spirit of Vengeance returns to aid the Thunderbolts in their fight against Mercy. But even old flame-head might not be enough to turn this tide. 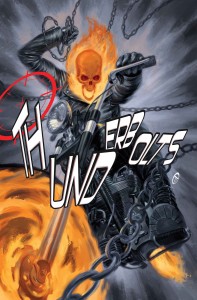 Marvel is pleased to present your first look at THUNDERBOLTS 20.NOW – from the red hot creative team of Charles Soule and Carlo Barberi! General Ross’ ragtag team of Thunderbolts were brought together to solve the problems that no one else could. But what happens when the problem…is one of them? The god-like Mercy has continues to wreak havoc and destruction – leaving nothing but blood and bodies in her wake. She’s gone too far – and the Red Hulk has turned to an unlikely ally in his quest to shut her down for good – Johnny Blaze, the original GHOST RIDER!

But even the Spirit of Vengeance himself may not be enough to keep this team of sinners and killers out of hell itself. Or maybe he’ll lead them there? Find out when Thunderbolts explodes onto the All-New Marvel NOW! scene in THUNDERBOLTS 20.NOW this January!

As a big fan of Ghost Rider, I’m always happy to see him back in action in the Marvel U in any form. I am a title surprised to see Jonny Blaze and his bike featuring in the pages of Thunderbolts though- especially since we’re not too far off from seeing a brand new Ghost Rider (complete with flaming muscle-car) appear.

I’m not going to complain though, since Blaze and Danny Ketch’s versions of Marvel’s Spirit of Vengeance were some of my favorite characters in the Marvel pantheon. If you’re a Ghosty fan, enjoy while you can I guess.

Jason's been knee deep in videogames since he was but a lad. Cutting his teeth on the pixely glory that was the Atari 2600, he's been hack'n'slashing and shoot'em'uping ever since. Mainly an FPS and action guy, Jason enjoys the occasional well crafted title from every genre.
@jason_tas
Previous Choice and morality to play a big part in Sherlock Holmes: Crimes and Punishments
Next Cataclysm: The Ultimates Last Stand #3 (Comics) Preview