It seems that Nintendo and Cambell’s have partnered up in a deal to advertised Mario on Spaghetti-O cans. Check out the new design posted in the Twitter feed. 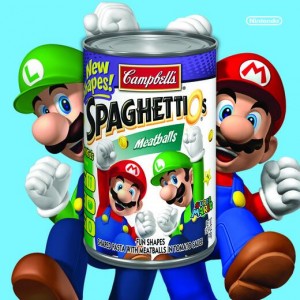 In the late 80s and early 90s, when Nintendo was the industry king, they were advertising Mario everywhere, but especially on food products. If you were a kid back then, chances are you remember one or two of Nintendo’s food related commercials, maybe you even remember eating some of the Mario shaped macaroni your parents bought you. An event like this may not seem like much, but it does hint to a possible better future for Nintendo.

For a while, they were slowing down with advertisement like this. Deals such as the kind with Campbell’s became more scarce as they were losing ground to Sony in the late 90s. At most you would only be seeing ads like Microsoft with its Frito Lay sponsorship via Halo, or Solid Snake with an energy drink. In recent years, it seems Nintendo is stepping up their game with ads, and incorporating Mario into more products such as this, which can only mean they have the money to spend on ad space. This contradicts what certain voices in the video game industry and video game journalism have been saying about Nintendo lately; that they’re a dying and irrelevant company, one which has no money to throw around at all.

Well, my name's Christopher Deleanides as you all know and I'm the Nintendo Editor here at BG. I've been playing video games since 1992, and I've been a Nintendo fan the entirety of those years. My love for video games as well as Nintendo hasn't changed, and probably never will. The only thing that comes close is politics, as I'm very deeply involved in both local and international issues.
Previous Ace Attorney – Dual Destinies to be Released in October
Next The Evil Within gameplay trailer creeps out of the TGS