2K Games is bringing the former THQ-published franchise over to their stable in style with the Phenom Edition of WWE 2K14. 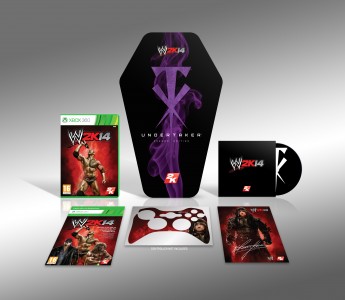 Here’s one for the Deadman fans; WWE 2K14 ‘Phenom Edition’ is set to launch right alongside the standard version of the game this Fall. In addition to the game itself (duh), this special edition pays homage to one of the most popular and longest lived (pardon the pun) wrestlers of all time- The Undertaker.

Known as the Deadman, the American Badass, and of course The Phenom, The Undertaker (Mark Calloway) has been around for a long, long time in the Federation. He’s battled the likes of Hulk Hogan, the Ultimate Warrior and Bret Hart- and now he’s the focus of the collector’s edition of the latest game in the WWE video franchise.

Inside of the tin casket case (nice touch), the Phenom Edition of WWE 2K14 is:

All in all,, this is a pretty nice little set- especially if you’re a fan of Calloway’s immortal WWE character; The Undertaker. Actually, I’d be in just for the American Badass character, that was always my favorite version of ‘Taker. The bike entrance was cool, the outfit was cool… even the entrance music was cool. And I mean either the Kid Rock or Limp Bizkit version by the way.

Jason's been knee deep in videogames since he was but a lad. Cutting his teeth on the pixely glory that was the Atari 2600, he's been hack'n'slashing and shoot'em'uping ever since. Mainly an FPS and action guy, Jason enjoys the occasional well crafted title from every genre.
@jason_tas
Previous The Wolverine (movie) Review
Next Betrayer announced for PC, coming this month