The Third Street Saints return with pretty much everything you already love about the series; plus a ton more.

I’ve never really been a big fan of Saints Row and I’m not sure why. The game has always reveled in it’s silliness and I love comedy, so it’s a bit of a mystery to me why it never clicked for me. The series always had the image, in my mind at least, of a slapstick version of Grand Theft Auto and that just didn’t do it for me for whatever reason.

Well, after sitting down with Saints Row IV for an extended preview, I’m thinking I might just be an idiot. Why’s that? Because SRIV is one of the most purely fun games I’ve played in a long, long time.

Originally just an expansion pack for Saints Row 3, SRIV has grown into a fully fledged adventure all its own and is absolutely brimming with things to do and see. Having not been overly familiar with the franchise outside of a few hours experience with the original, I can definitely say that this is one title that won’t leave you wanting for activity.

Making things even more appealing is that SRIV is absolutely loaded with jokes and pop culture references, with the opening mission being a microcosm of that. In fact, the first thing you’ll hear when you start up the game is the sound of Little Richard blaring across a helicopter speaker system a’la Predator as you and your team infiltrate a terrorist compound. Yep, the Saint’s are national heroes at this point and are trusted with missions of the utmost importance.

The whole level, called Zero Saints 30, is chock full of action movie stereotypes right down to the end where it looks like all hope is lost and the main character saves the day to the tune of an Aerosmith song. It’s awesome in and of itself and had me wanting to play a full game just like that. Until I got into the actual meat and potatoes that is Saint’s Row IV. 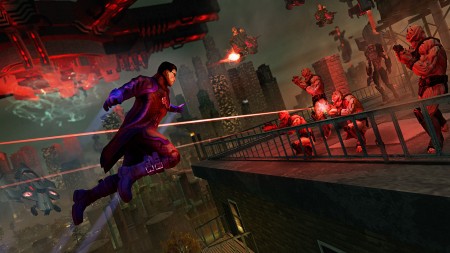 I won’t spoil too much of the well-crafted humor or too many of the story points here, but everything comes across really well and Volition has done a bang up job making a world that’s just plain fun to play around with. Dropped into a simulation of his or her’s (you can customize your character) hometown of Steelport by an invading alien force (yep, aliens) called the Zin, the Boss of the Saints and now President of the United States must learn to use the Matrix-like virtual world against his captors who seek to ‘break’ him.

To that end, you’ll be getting not only an arsenal of guns (lots of guns-uh), but also a wicked collection of superpowers. Super-speed, super-jumping, offensive abilities like freezing breath and more are all included and are all really fun to use. You’re not Superman, but you’re pretty close to it and can seriously wreak some havoc on the Zin and the virtual citizens of Steelport alike if you should so desire.

Everything in the game, from the hardware to your powers are upgradable too. For some things, you buy upgrades via cache (you are in a computer after all), but to improve your abilities you’ll need to collect pieces of code left behind by the master program. These random fragments are scattered across the simulated city and collecting them is almost a game unto itself. I was immediately reminded of Crackdown as I grabbed the errant fragments of light and that’s an extremely good thing. Let’s just say I had a Crackdown ‘problem’ and leave it at that… 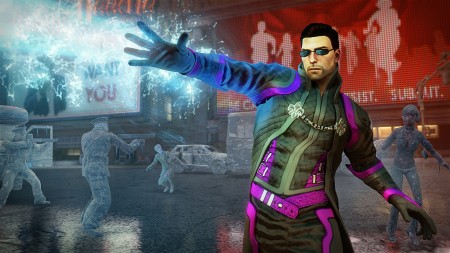 While I’m on the subject of ‘light’ too; I was really impressed with the effects and the graphics of Saints Row IV overall. Open world games usually don’t have all that great of a visual flair but SRIV is a very nice looking game indeed. Everything from the halls of the White House (or White Crib as it’s called here) to the dark and forbidding skies of faux Steelport look great. The effects on the superpowers are also quite nice with a cool blue glow encompassing your character as he/she zips across the landscape like the Flash.

Likewise, the voice work is terrific and all of the characters sound great and are scripted well with some honest to goodness laugh out loud moments. All of the voices for your created character are high quality and there’s even a voice option (when you’re creating your character) called ‘Nolan North’- and yes, it’s the full script performed by North. I’m sure I don’t have to tell you how good of a job he did with that.

If it sounds like I’m impressed with just about everything in Volition’s latest edition of Saints Row, it’s probably because I am. As I said, I haven’t played a Saints game since the original, but I really enjoyed my time with this one. There’s just so much to like in the game that it’s honestly kind of impossible not to.

Saint’s Row IV is due in August for the Xbox 360, PS3 and PC. It’s rumored to be the last game in the series, but I seriously hope it isn’t. As for me, I’ll be going back and seeing what I missed in Saints Row: The Third- well, that and counting down the days till SRIV hits the streets on August 29th.

Jason's been knee deep in videogames since he was but a lad. Cutting his teeth on the pixely glory that was the Atari 2600, he's been hack'n'slashing and shoot'em'uping ever since. Mainly an FPS and action guy, Jason enjoys the occasional well crafted title from every genre.
@jason_tas
Previous The Walking Dead: 400 Days now available
Next New Prince of Persia announced for iOS