The survivors return to undead infested paradise in a game that feels hauntingly familiar… not that that’s a bad thing. 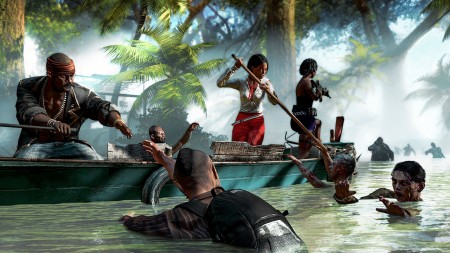 The first Dead Island was indeed something different. Yes, it’s true that zombies were relatively old hat when it came to video games even back in 2011, but Dead Island made them feel fresh and new. Aside from the RPG elements that the game brought to the table, a good chunk of that ‘newness’ came from the setting.

If you’re not familiar, Dead Island was set on a resort filled with (former) vacationers in the middle of a tropic paradise. If you’d played games for any length of time, then you’d probably fought zombies in every setting imaginable except the beach. Not that the sandy surf was the only setting in Dead Island mind you, but it sure was the coolest. And it wasn’t all aesthetics that made DI great, because there were plenty of other things about Dead Island that set it apart from other undead shooters too- namely, that it wasn’t a shooter.

Though there were guns to use in DI, they were few and far between and the emphasis was placed firmly on melee weaponry. Crafting and maintaining your tools of the trade was also pretty important, as busting an oar over a zed’s head would leave you on the short end of the stick. Literally. 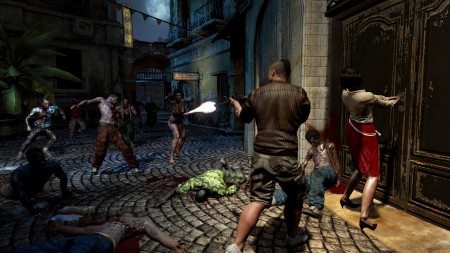 In short, there was a lot to like about Dead Island, even for someone who’s not all that crazy about the undead to begin with. As a sequel, Dead Island Riptide may not have the ‘new’ factor going for it, but it still has everything else that made DI so much fun to play through.

When Riptide picks up, DI has just come to a close and the four survivors (who are immune to the dead plague) have landed on a military transport. Unfortunately, that’s not really a good thing as there’s a private concern who’ve taken charge of the rescue and recovery operation and they’ve been dying to get their hands on the rumored quartet who can’t be zombified.

All four of Dead Island’s characters are swiftly tossed in the clink where they meet a new member for their little ‘team’, the former soldier John Morgan. Morgan can’t be turned either and becomes the fifth playable character in the game alongside rapper Sam B, ex-quarterback Logan Carter, special agent Xian Mei, and cop Purna. The four original characters can actually be imported into the game if you played the first Dead Island too, which is a nice touch.

Needless to say, things go downhill fast for everyone involved and undead hijinks ensue in an opening level that’s a very memorable experience and easily one of the highlights of the early part of the game. From there, it’s back to the islands where the first game took place- but instead of playing in Banoi, you’re stuck fighting for survival on Palanoi- which is another island in the same chain.

Luckily, everything from the first game (the digital/analog play control, the weapon building, etc…) is still a part of Dead Island Riptide, and that’s a good thing. Though Dead Island had its issues, most of it was very well done and loads of fun to play- bottom line, if you liked that, you’ll like this. Actually, no- you’ll like this more. 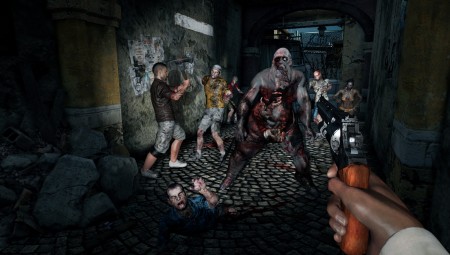 It’s now much easier to keep your favorite weapons in fighting shape and actually, I found it easier (and more fun) in general to manage your arsenal and upgrade everything than in the first game. Maybe I’m a little fuzzy in remembering, but my version of Morgan that I played in Riptide seemed to level-up way faster than anyone I played as in plain old DI.

And while we’re on the subject, also much like in DI the graphics are very solid in Riptide. I loved the sand and natural settings of the first game in the series and the same goes here. Though there are some odd clipping issues here and there, most of the game is pretty enough to look at and the undead all look sufficiently disgusting.

I don’t recall there being this many different kinds of zombies in the first Dead Island either. You’ll face your standard ‘walkers’, the faster ‘infected’, soggy ‘floaters’ and more. Most of them have special abilities (like toxic infected that toss hunks of rotted meat at you) and they’re all pretty fun to battle. The special undead really mix in nicely too and change things up well from your usual hordes. 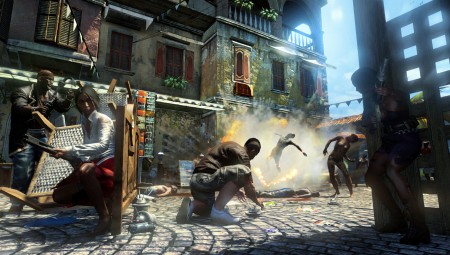 Some places where you’ll definitely be running into a few of the special baddies are the new Dead Zones. These are almost like dungeons in more classic-flavored RPG’s where you’ll find new weapons, some tough baddies to fight and the special infected.  Although I liked the idea behind the Dead Zones, they do tend to all look eerily similar. It looks like Techland reused most of set pieces for the different types of ‘Zone and more than once I thought I had been to an indoor location before even though I hadn’t.

Also new to Dead Island Riptide are the ‘horde mode’-like areas. Periodically, you’ll have to set up perimeter defenses and protect areas from rushing herds of the rotting dead. These are great change-ups to the action and I actually would have liked to have seen more of them. Even when you’re not playing with a second (or third, or fourth) player, these are still loads of fun as your bot pals are all darting about and hacking away at zombies that make it through. No, the AI on the bots isn’t ideal, but it’s still a good time, though admittedly way more so with a buddy or two as you can actually coordinate your efforts and slide and dice way more efficiently.

One thing I did take issue with was the sound design in Dead Island Riptide. It’s sort of a mixed bag. The zombies sound pretty cool most of the time and a good deal of the voice work is great in that semi-b movie way, but some of it… Every once in a while there’ll be a voice that’s way too quiet, or way to loud among the NPC’s. And then there are the zombie screams from zombies who aren’t even there. Every once in a while I heard a zombie yell like it was right next to me. While that might be good for a cheap scare once or twice, after a few dozen of them they get more annoying than anything else.

I think one of the biggest problems that Dead Island Riptide might have is its similarity to the first game. I can even recall reading bits from when the game was announced where publisher Deep Silver had to make the clarification that Riptide was going to be a sequel and not an expansion to Dead Island. While it is true that the two games do share a setting that’s no longer ‘new’, it’s also true that that similarity doesn’t affect the fun factor that’s in play in Riptide.

And it’s in that arena that Dead Island Riptide shines. Sure some of the ‘get this’ and ‘go there’ missions and side quests can get a little tedious at times, but the main meat and potatoes of the game -the zombie hacking- never really gets old. It’s fantastic fun to dash into a group of walkers, scattering them to the four winds and then proceed to slap the heads, arms and everything else off of them with a perpetually flaming shovel. And doing it in co-op play? Just that much better.

Bottom line- if you didn’t like Dead Island the first time around, Riptide probably won’t change your mind. If you did like it (like I did), then Dead Island Riptide should hit the spot nicely for you.

Update: An update for a review? Yep- because apparently I’m an idiot. Deep Silver has corrected us in that they never actually said Dead Island Riptide was to be a fully fledged sequel to the original game. Though it doesn’t change anything in my review as per the final score or the good and bad points of the game, in an effort to be as accurate as possible, I felt it was important to add on this little note.

Jason's been knee deep in videogames since he was but a lad. Cutting his teeth on the pixely glory that was the Atari 2600, he's been hack'n'slashing and shoot'em'uping ever since. Mainly an FPS and action guy, Jason enjoys the occasional well crafted title from every genre.
@jason_tas
Previous Metro: Last Light displays its weapons and inventory
Next Unlock some cool stuff in Poker Night 2