Home / Collectables / Her Universe intros the Year of the Fangirl

Her Universe intros the Year of the Fangirl

We all know that there are legions of fanboys out there for just about everything, but the Fangirl population is a rapidly growing one too. And it’s one that Geek Girl clothier Her Universe is set to give a place all their own. 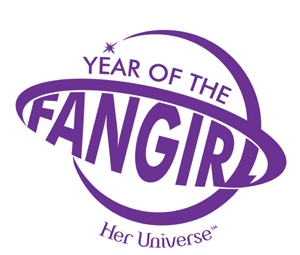 The initiative, called Year of the Fangirl, is actually a daily spotlight (that just started on the 25th) where HerUniverse.com will feature a different female sci-fi fan every day as ‘Fangirl of the Day’. Fangirls of every walk and genre are welcome to enter (if you’re under 13, you need to be nominated by an adult though) and have the geek spotlight shown on them.

Company owner Ashley Eckstein (who voices Ahsoka on Star Wars: The Clone Wars) has hand picked a squad of five to sort through all the entries and select winners.

“From day one, it’s been very important to me to make Her Universe a positive and supportive community for fangirls,” said Ashley Eckstein. “I’ve traveled the nation over the past 2 ½ years with Her Universe and I have been inspired by so many amazing women. There are several great outlets that highlight fangirl celebrities and pop culture news but I wanted to create a place where we will share the stories of everyday women who are proudly letting their geek flag fly! If she considers herself a fangirl, we want to hear her story!”

So who is this Jedi Council of female geekery? The group of five was actually hand picked by Eckstein and definitely has the fangirl cred:

Fans who wish to submit themselves to be featured as the Fangirl of the Day and those looking to vote or nominate others can head to www.heruniverse.com and get to it.

Jason's been knee deep in videogames since he was but a lad. Cutting his teeth on the pixely glory that was the Atari 2600, he's been hack'n'slashing and shoot'em'uping ever since. Mainly an FPS and action guy, Jason enjoys the occasional well crafted title from every genre.
@jason_tas
Previous Preview: Deadpool #6
Next Marvel Minimates get strange