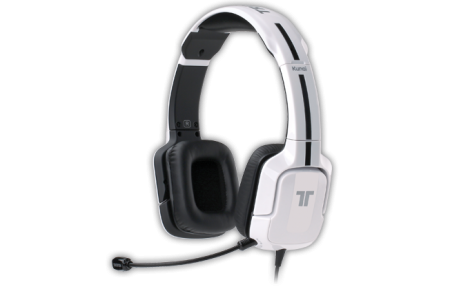 Last month, I had the privilege of reviewing a very sleek, high-end, Dolby Digital 5.1 surround sound Tritton headset (review here). It was a real beauty, and I highly recommend it! The problem, though, with high-end headsets is the cost. They’re amazingly awesome, but they’re also expensive. So what are you to do for a gaming headset, if you want something nice, but don’t want to spend a lot of money?

If you are a PlayStation 3 gamer and are using composite or component inputs for your audio/video, the Tritton Kunai Stereo Headset for PlayStation 3 and PS Vita might be what you’re looking for.

The Kunai headset allows PlayStation 3 owners to listen to both game audio and communicate at the same time, filtering both audio channels into the headphone speakers.

While the headset isn’t wireless, the cord is long and you’ll have plenty of space to stretch out across the room (within reason). The headset itself, which can be used on a multitude of other devices (more on that later), connects to the audio cable, by way of a 3.5mm connection, to an in-line audio controller.

The Tritton Kunai Stereo Headset for PlayStation 3 and PS Vita requires an RCA connection (composite or component) to work. (HDMI-only audio setups will not work.) The cool thing about the RCA connectors for the Kunai is that they serve a dual purpose: feeding the audio from your PS3 into your headset, as well as providing a pass-through from your PS3 to your TV/receiver.

Once you have it set up, you shouldn’t have to fiddle with the RCA connectors again whether you want to listen to the in-game audio through your TV/receiver or through your headset. Simply place the cord with the in-line connector aside, and plug in the headset into the 3.5mm jack when you’re ready to use it. 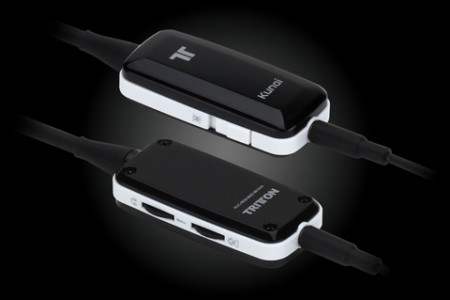 If you’re interested in setting up the headset for voice communication, you’ll need to attach the removable microphone to the port on the headset. It easily locks into place with a push and a twist, and can be removed by doing just the opposite. The microphone attachment is also flexible, and can be bent into a variety of different positions.

Before using the headset for chat, and listening to voice chatter through the headphone speakers, you’ll also need to make sure the USB connection is plugged into your PlayStation 3, and the Sound and Accessory Settings in the PlayStation 3 Settings menu are set appropriately.

You’ll always have total control over the headset’s audio through the in-line audio controller. There are two adjustable dials, one for the game audio and the other for the voice communication volume. There is also a switch that will mute the microphone for those moments when you don’t want the online world to hear your mom going through the whole good-night ritual with you. “I love you! Please don’t stay up late playing games. Remember, we have a busy day tomorrow, your father and I will be waking you up nice and early!” You know how moms can be!

The quality of the sound is very good. I tested the system on a range of different games, as well as on a couple of different devices (iPod Touch and iPad). I specifically looked for games (and music) with a lot of bass. The Kunai is great for gaming and listening to music. The quality was very good.

It also worked well when listening and chatting with friends. It’s really nice to be able to listen to the ambient game sounds, with the in-game chatter mixed in. If the sound effects and voice chat get a little out of control, you can easily adjust the volume of one or both audio channels. 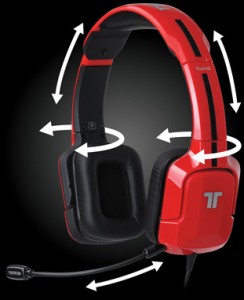 The Tritton Kunai Stereo Headset for PlayStation 3 and PS Vita is also very adjustable. Not only can you extend length of the headset to fit your head, but the speakers pivot to allow for maximum comfort.

While the headset is optimized for the PlayStation 3, it should be usable, at least for listening to game audio through, on ANY video game console that is connected to your TV or receiver via the red and white RCA connections. If you’re looking to connect this to an Xbox 360 for anything other than game audio, like voice communication, it won’t work (unless if you’re using a device, like the Kinect, as the microphone — but that’s mere speculation). There are other Tritton headsets designed specifically with the Xbox 360 in mind.

Also, as a headset, the Kunai can be plugged into anything with an analog 3.5mm port, specifically the PS Vita. It also works well on iPhones, iPods, iPads, MP3 players, laptop computers, etc.

When connecting to devices like the PS Vita, it’s worth noting that the cord isn’t very long. It’s about as long as your typical set of ear buds.

The Tritton Kunai Stereo Headset for PlayStation 3 and PS Vita comes in three different colors: red, black, and white. The one for review was white. It retails for $49.99.

For the budget-conscious gamer, looking for both a device to use for voice communication and to listen to game audio, the Tritton Kunai Stereo Headset for PlayStation 3 and PS Vita, is a really nice option. It’s easy to connect to existing composite or component audio setup. When using it for chat, just plug the USB into your PS3, make sure your audio settings are correct, and you’ll be golden!

Both voice and game audio channels can be adjusted though an in-line audio controller. Using a switch, you can also mute the microphone. The Kunai can be used on a variety of different devices that have a 3.5mm port, like the PS Vita, iPad, iPod Touch, and and just about every MP3 player in the world.

The headset is comfortable with multiple adjustable points, and the sound quality is great! Both music and game audio sounds fantastic! For $50, the Tritton Kunai Stereo Headset for PlayStation 3 and PS Vita is an awesome deal!

Troy is the Features Editor at Brutal Gamer. When he's not writing about or playing video games, he's enjoying life with his wife and children. He also loves coffee. And lots of it.
Previous Smash Party Cat Review (iPad)
Next Hauppauge HD PVR 2 Gaming Edition Review