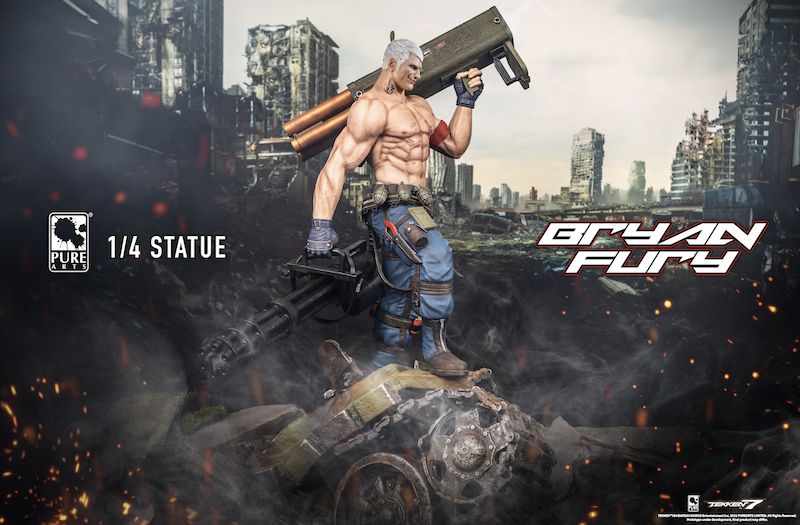 A company listening to its fans is always nice to see, and that’s exactly what PureArts is doing with the revision for its upcoming Bryan Fury statue.

Apparently the reaction to PureArts’ Bryan Fury statue wasn’t what the company had hoped it’d be. If you didn’t know, the character, a fan favorite from the Tekken series, is the subject of the collectible company’s latest quarter-scale piece.

Clocking in at 21″ tall, Fury will be limited to just 750 pieces globally. With that scale, he’s going to be pretty impressive, and should make for a nice centerpiece in any Tekken fan’s collection.

And if you were in that lot that wasn’t crazy about his face sculpt, he’ll be sporting a new look that fans seem to be responding to. PureArts says it’s “received a lot of positive reactions to this update”. And so to give fans who’ve changed their minds about it a little more time, the pre-order window has been extended.

If you’d like to buy-in, you can now order one of these bad-boys though February 17th, 2022. Of course, he’s not scheduled to ship til a little while after that, in quarter 3 of this year.

Priced in at $719 USD (there are payment plans as well), you can click here to secure one for yourself.

Jason's been knee deep in videogames since he was but a lad. Cutting his teeth on the pixely glory that was the Atari 2600, he's been hack'n'slashing and shoot'em'uping ever since. Mainly an FPS and action guy, Jason enjoys the occasional well crafted title from every genre.
@jason_tas
Previous Trailer: Hot Wheels Unleashed gets ready to crush ’em with Monster Truck DLC
Next Prime Gaming serves up Stellaris, Ashwalkers, As Far As The Eye and more in February 2022