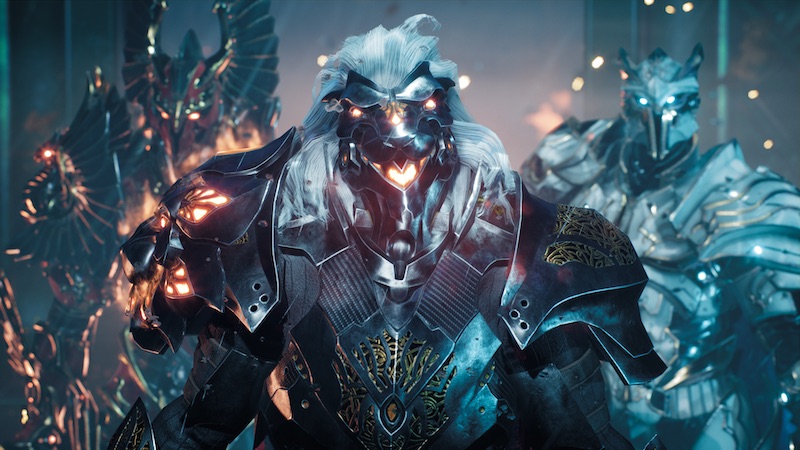 It’s actually a pretty good month for PlayStation Plus subscribers, the latest in a series. It brings Godfall: CE, DC Super Villains, and Mortal Shell.

While Xbox Live has delivered a spread of older titles, Sony goes much newer with its PS Plus selection this month. The games themselves might not all be for everyone, but there’s no denying that they’re all solid titles.

The action begins with a version of Godfall, Gearbox Software’s fairly new looter… slasher. Departing from the company’s usual looter shooters, Godfall places a sword in the hands of gamers. This though, isn’t the complete Godfall experience.

Instead, the Challenger Edition (which is what this is) presents a trio of endgame situations to play through. Two things though: first, you’ll be appropriately leveled-up, and co-op is in play. So if you have a friend who’s been playing the full version (or presumably this special edition as well), you’ll be able to quest together.

Then there’s LEGO DC Super Villains. This one’s been out for a decent while, but it’s a LEGO title that had a very positive reception when it arrived. The game presents gamers with the chance to play as LEGO versions of their favorite DC Comics super villains, as they battle the Justice Syndicate. Yep, alternate universe, evil Justice League.

And finally, there’s Mortal Shell. A single-player, action RPG that offers souls-like gameplay in a creepy setting, this one’s fairly new as well.

The above are joined by last month’s assortment of VR freebies, which are still up for the grabbing. Those includes The Walking Dead: Saints and Sinners, The Persistence, and Until You Fall.

Speaking of, if you missed last month’s games now’s the time to grab them as well. November’s free titles are still available to be added to your library today, but the new offerings will replace them tomorrow, December 6th.

Jason's been knee deep in videogames since he was but a lad. Cutting his teeth on the pixely glory that was the Atari 2600, he's been hack'n'slashing and shoot'em'uping ever since. Mainly an FPS and action guy, Jason enjoys the occasional well crafted title from every genre.
@jason_tas
Previous Video: Marvel’s Andy Park shows off Shang Chi concept art, and draws the hero
Next Trailer: The 2nd big DLC pack arrives for The Dungeon of Naheulbeuk