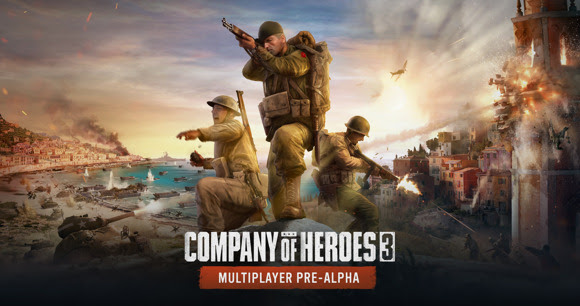 Sega and Relic are taking strategy gaming back to the war-torn battlefronts of WWII Europe. Get a taste of what Company of Heroes 3 will deliver tomorrow.

Yes, pre-alpha, as in ‘the retail version is a ways off’, set to land some time in 2022. Nevertheless, tomorrow PC gamers will be able to get a feel for what the long-awaited third game in the Company of Heroes series of RTS’ will deliver.

That’s due to that previously mentioned pre-alpha, which will kick off a multiplayer test tomorrow, November 30th.

The Multiplayer Pre-Alpha will allow players to jump online and get a first glimpse at some exciting new multiplayer combat. They can experience four Italian maps in a variety of game modes, including co-op vs AI opponents, competitive PvP and Skirmish vs AI, while trying out familiar and brand-new features like Full Tactical Pause in skirmish mode, vehicle side armour, Verticality, Battlegroups, and Veterancy. Two classic factions return, the US forces and The Wehrmacht, each bringing their unique and game-changing abilities to the battlefield. More factions will be revealed in the run up to launch, with Company of Heroes 3 promising more content than ever before.

If you’d like to take part, you definitely still can. The pre-alpha can be pre-loaded right now via Steam on the PC, though there are some hoops. Before you grab the game, you’ll have to set up a Company of Heroes Development account.

That can be done here, and is free. After that, you’ll have to link your Steam account to it, which should be a simple task. And finally, once you do that you’ll be able to get that download, and will be ready for tomorrow.

All told, the pre-alpha test will run from Tuesday, November 30th (starting at 5pm GMT) til Tuesday, December 7th (at 4am GMT).

Jason's been knee deep in videogames since he was but a lad. Cutting his teeth on the pixely glory that was the Atari 2600, he's been hack'n'slashing and shoot'em'uping ever since. Mainly an FPS and action guy, Jason enjoys the occasional well crafted title from every genre.
@jason_tas
Previous Trailer: The 45th and final Street Fighter V character is here
Next Call of Duty: Vanguard (Xbox Series X|S) Review