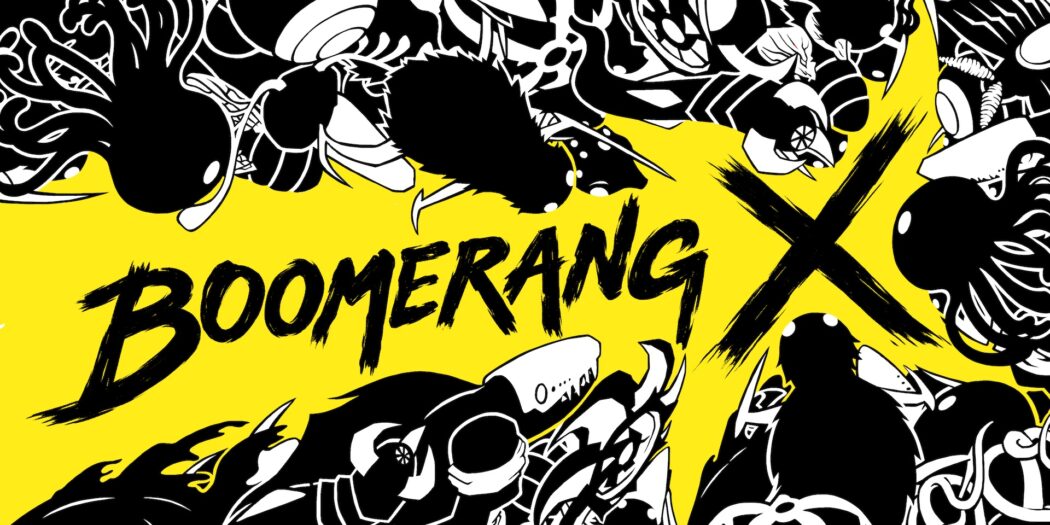 Boomerang X is a fast-paced first person action-adventure platformer where ninja star throwing, boomerang mechanics and stylized visuals all combine into an ADHD person’s worst nightmare. While my hands cramped up playing Boomerang X though, I found it to be a fun and balanced experience.

You have crash landed on an island that was inhabited by the Yoran – giant mantis people. After passing a small dead village of Yoran, you find a special weapon in a smithing area (Boomerang X? Hint hint. Nudge nudge). This weapon can do incredible things beyond your own impressive speed and jumping abilities.

Magical doorways appear that then lead you through areas where black, spirit-like enemies attack you. Using your boomerang-ninja-star you need to defeat waves of these enemies to progress.

The overall story is simple and good for a short, first person platformer. There’s good environmental storytelling, which is where the narrative actually plays out.

A character later takes the “exposition dump” role however, and it’s actually rather charming. Everything is told in a quite efficient way so it never feels like a snore fest when reading dialogue.

Boomerang X shines here with its gameplay mechanics. Throughout the game you unlock new abilities for your boomerang. These allow you to move better or perform new attacks.

Now things have become interesting. Your primary weapon becomes your mode of travel but also your greatest enemy sometimes. You really have to use it with finesse. It’s also challenging to return the boomerang instead of accidentally dashing to it and hurting yourself. The game is also fast paced and reactive, so you need to be on your toes and have awareness.

Often I found myself juggling between dashing in a panic and just flying around to survey my surroundings. My hands and wrists got quite crampy playing so I had to take some breaks (I do have some CTS so this may not be the case for you).

Boomerang X has a wonderful difficulty curve. Easing you into basics and giving you a challenge later on. After a certain number of levels, you unlock a new ability. The level directly after is setup to require good use of the new ability to clear it. It kinda forces you to learn to use it unless you want to struggle which I think was done fairly.

One such ability is “Scattershot” where you get a shotgun blast of energy after killing 2 enemies in a single throw. This is useful for clearing a lot of enemies in front of you.

You’ll only really grasp the full extent of these abilities when playing, so the tutorials can be somewhat limited despite how good they are in general. Towards the end, and once I understood the abilities better, I felt like an utter badass flying through enemies, slowing time to “boomer” one, blasting another in the distance (with a snipe-like ability) and carefully landing to kill any around me (another ability).

Enemies consist of these darkness creatures and some have weakpoints you have to hit to completely kill them. This adds an extra level of complexity as each enemy has its own behavior, attack pattern or weakspot. Enemy designs also vary and are used in a complimentary way with the arenas. Due to enemies being varied, battling them in certain combinations becomes tricky, interesting and a puzzle you need to solve.

Each level is designed differently. A single level will have a unique layout, different enemies or enemy spawn combinations and different health circle placements. Every level has a large crystal you must break to start the level. A certain number of enemy waves will begin spawning. In these waves are singled out enemies you must kill to complete the wave. You don’t have to kill all the enemies and that makes the gameplay more engaging. Instead of mindlessly killing everything, you can now observe, identify and eliminate specific targets which encourages movement.

Generally, each wave gets more difficult than the previous one with more enemies or a new more difficult enemy being spawned. Once all waves are defeated the path to the next level opens up. If I had one complaint about the gameplay it’d be how long you need to stand on a healing circle to regen a health shield. The enemies and projectiles can be very fast moving, so choosing to stand still and heal could actually cost you more health. I think it could be a bit more forgiving and let me just plop on the health circle to heal so I can maintain momentum.

Boomerang X has this simplistic, stylized, almost comic-book look with some Asian influences here and there. Everything has fairly simple coloring and texture. It works towards the benefit of the game because it is easy to make out enemies, their weakpoints, the arenas, what is happening around you or to you despite it being quite complex for the senses.

The music and sound effects are excellent! Again, with Asian influences, the music is adaptive and the closer you get to finishing all waves of enemies the more intense it gets. It’s a combination of traditional percussion, some electronic elements and traditional stringed instruments that give Boomerang X this ancient, powerful vibe. Each arena has a unique track as well I think.

Boomerang X is a polished, fun little game. I managed to finish it in just over 2 and a half hours. There’s a New Game+ mode for further playing and I think it would be interesting to see time trials and scoreboards added. Seeing people try and speedrun this or finish levels under an amount of time would be very entertaining. All in all, Boomerang X is well rounded and should have you coming back for more.

I'll be coming back!

Pulling off gnarly combinations of throwing, returning, dashing and shooting has never felt so satisfying!

Megan here! I am pretty well versed in all things weaboo and geek. I've loved videogames since I was born and even made my own for my 3rd year of Multimedia at the University of Pretoria in sunny South Africa. I have enjoyed anime from the days when Pokemon was considered satanic and Aniplex used to exist on DSTV. In the past couple years I have really gotten into manga, particularly Berserk to see where the story headed after the original anime. If there's one thing I will always love 110% it is cats. Don't doubt my faith in my love for felines.
Previous SDCC 2021: Netflix releases event schedule for the con-at-home
Next SDCC 21: Mattel’s 12 Days of Fandom kicks off with “Ultimate Edition” Sgt. Slaughter figure