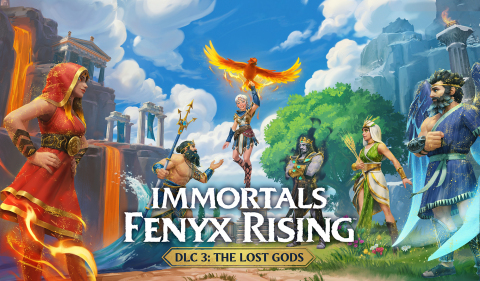 Fenyx Rising’s latest downloadable content arrives this week, and it introduces a top-down perspective on the fantasy/mythological world.

It isn’t too often that a DLC pack introduces a completely different way to play a game, but here we are. Immortals: Fenyx Rising, from Ubisoft, is an ancient Greece-inspired, third-person action adventure title, with an open-world. Or at least, it was.

The Lost Gods DLC, which arrives this week, brings with it a top-down view on the action. Not only that, but it also intro’s more of a “brawler” feel to the game. Pretty cool, honestly.

Of course, Immortals isn’t the only game to see a release on the Switch this week. There’s a ton more stuff as well, though none of it is all that high-profile. There’s MotoGP 21, if you’re a race fan, and The Skylia Prophesy looks kind of neat too, but that’s about it.

Scroll down to check the rest of the list out.

Jason's been knee deep in videogames since he was but a lad. Cutting his teeth on the pixely glory that was the Atari 2600, he's been hack'n'slashing and shoot'em'uping ever since. Mainly an FPS and action guy, Jason enjoys the occasional well crafted title from every genre.
@jason_tas
Previous Thor begins new “Revelations” arc, promising a battle with Captain America
Next Make way, there’s a new Orc team in the latest look at Blood Bowl III