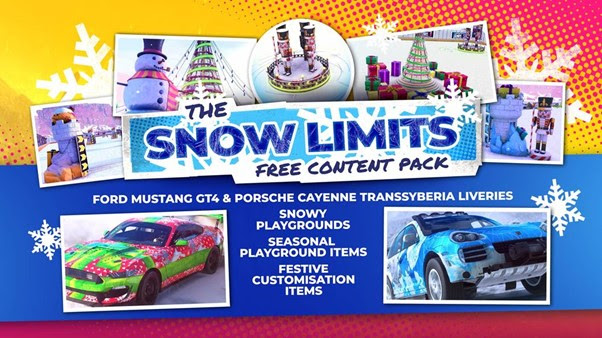 A host of free downloadables have hit Codemasters’ Dirt 5 this week, including a new course, seasonal goodies, and steering wheel support.

Dirt, with a layer of snow

There’s quite a bit to like in the latest dose of content for Codemasters’ Dirt 5 this week. Probably the biggest addition though the new steering wheel support.

Not just limited to the PC, gamers across all supported platforms now have the ability to make use of a wheel peripheral with the game. Of course, those vary depending on what device you’re playing on. Codemasters cites both Logitech and Thrustmaster in the press release.

Part two of the announcement is the Snow Limits pack. The new collection of DLC is winter-themed, and loads up on the sights and sounds of the season.

“an array of festive new objects to use in DIRT 5‘s Playgrounds mode, a brand new Sprint race event on the ice at Roosevelt Island, and some fresh customization options for your profile and liveries including holiday liveries for the Ford Mustang GT4 and Porsche Cayenne Transsyberia”.

And finally, probably least interesting, is a set of fixes and improvements. Officially arriving with update 2.00, is an assortment of “bug fixes and optimizations”. You can find the full patch notes here.

All of the above is landing on the PlayStation and PC versions of Dirt 5 today, and on the Xbox very soon. Notable too, is that the Stadia edition of the game is still coming up, and set to land some time in 2021.

Jason's been knee deep in videogames since he was but a lad. Cutting his teeth on the pixely glory that was the Atari 2600, he's been hack'n'slashing and shoot'em'uping ever since. Mainly an FPS and action guy, Jason enjoys the occasional well crafted title from every genre.
@jason_tas
Previous Trailer: Tech-heavy Van Saar gang arrives in Necromunda
Next Trailer: Arizona Sunshine’s “Trailer Park” horde DLC arrives today