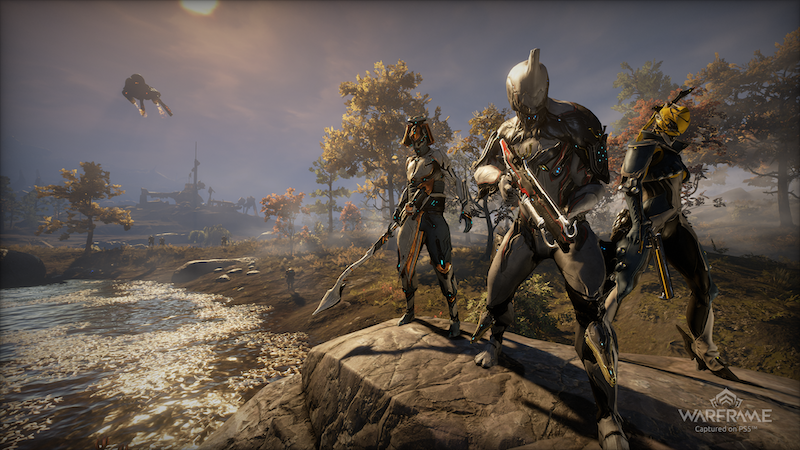 Time to give thanks, Warframe is coming to PS5. It’s coming up incredibly fast too, landing on Sony’s latest console this Thursday (November 26th).

What’s with those funky helmets?

Warframe is officially making the leap from current/past-gen to the next, with a PS5 edition that’s set to arrive this week. Yeah, announcement and launch in the same week. That’s 2020 for you.

Packing the full Warframe experience, publisher Digital Extremes is bringing the popular online multiplayer shooter to the new console on Thursday, November 26th. Gamers can expect “It isn’t very day that a ‘tower builder’ gets released. Mad Tower Tycoon is just that though, focusing on skyscraper building and management.” Of course though, there’s more.

Being that the game will be landing on the PS5, Digital Extremes says that you can expect a visually stunning experience. With reduced loading times, Warframe will be running in 4k, with a full 60fps.

Taking full advantage of the power of next-gen consoles, Warframe will run at up to 4K resolution and 60fps. Drastically improved loading times will zip players into the action as fast as possible, creating a seamless experience from player-filled towns to massive Open Worlds.

The all new Enhanced Renderer introduces dynamic lighting in unprecedented ways to Warframe. From the neon underbelly of Fortuna, to our newest landscape on the Infested moon of Deimos… there’s no better place to see the stunning differences. The light from the sun now casts long shadows through the trees, foliage creates dynamic shadows as players stalk through it, and the reflections of the dense Cetus market can be seen across each Warframe as they stroll through.

A game-wide texture remaster adds new levels of detail and enhanced color throughout the experience and reduces the space Warframe will take up on players’ hard drive!

In addition to the above, Warframe fans can expect cross-generation play, a new progression alert system that will let you know how close you are to getting a trophy, and for the game to make use of the PS5’s DualSense triggers.

There’s also a “PlayStation Plus Booster Pack” for subscribers of the PS+ service. That will be free of charge, and grant downloaders a $30 USD valued pack that contains “a new Sedai Obsidian Syandana — a design inspired by the new DualSense Controller — an Experience Booster, in-game Currency Booster, Credits and Premium Credits.”

Jason's been knee deep in videogames since he was but a lad. Cutting his teeth on the pixely glory that was the Atari 2600, he's been hack'n'slashing and shoot'em'uping ever since. Mainly an FPS and action guy, Jason enjoys the occasional well crafted title from every genre.
@jason_tas
Previous Mad Tower Tycoon brings tower building/management back to consoles
Next Secret Histories revealed in new Hellboy hardcover