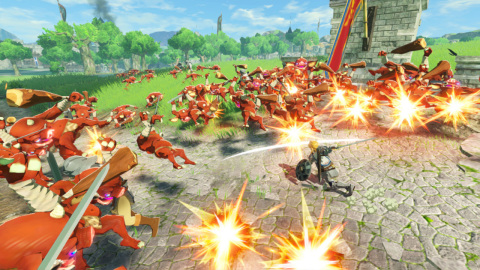 Home / News / Nintendo Download: Forge a Link in the Chain of Champions

Nintendo Download: Forge a Link in the Chain of Champions

Nintendos biggest holiday title arrives this week with Hyrule Warriors. But Sniper Elite 4, Serious Sam, and more are all along fir the ride as well.

Launching into the Holidays

Lots to like this week for Nintendo Switch gamers, who have a few bigger releases and a ton of small stuff to pick from.

As for the triple-A ones though, there’s probably a clear leader with Hyrule Warriors: Age of Calamity. The game is a prequel to the system-selling Breath of the Wild, and tells the story of what happened to Legend of Zelda’s famed kingdom 100 years before the events of Wild.

Despite all of that, and the fact that it’s clearly Nintendo’s tentpole for Holiday ’20, it might still be a somewhat niche release. Remember that this is a direct sequel to the original Hyrule Warriors, which is based on the Dynasty Warriors play-style. And yeah, even with the license, you have to kinda like that to really enjoy this. Good thing there’s a ton more stuff this week to pick from then.

The Switch is the landing spot for the Serious Sam Collection, as well as Sniper Elite 4, the surprisingly fun Monster Truck Championship, the arcade edition of Gradius II, and plenty more.

Scroll on down to take a look at the full listing.

Jason's been knee deep in videogames since he was but a lad. Cutting his teeth on the pixely glory that was the Atari 2600, he's been hack'n'slashing and shoot'em'uping ever since. Mainly an FPS and action guy, Jason enjoys the occasional well crafted title from every genre.
@jason_tas
Previous Helm Sportband HD wireless headphone (Gear) Review
Next Trailer: RYTE brings Myst-like action to VR next month