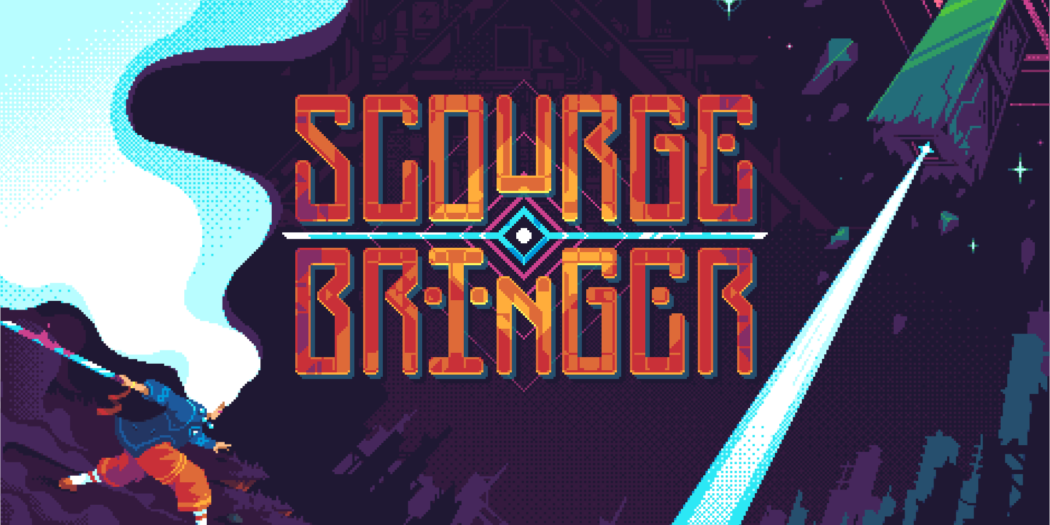 ScourgeBringer is a frantic 2D roguelite with some procedural level generation. While the pixel art is absolutely fantastic, the difficulty is rather intense.

At times Scourgebringer presents bullet hell scenarios, really annoying enemies and questionable drops that may cause frustration. Ignoring what I consider a critical flaw (and will explain later), ScourgeBringer is part eye-candy part ADHD nightmare, similar to Cuphead… but with a few more flaws.

The overall narrative of the game is told in dialogue and bits of logs you can find throughout the levels. It’s kinda vague but you can definitely piece them together to figure out what the gist of it is.

As the player you control Kyrha, who can move pretty fast, double jump, wall run and dash around. You can slash enemies with your sword or shoot them with your weapon, which starts as a generic pistol (named BLAST.32 unit in-game). You’ll need to slash enemies to refill the reload of the BLAST.32 in order to fire again.

You are also given a Smash attack for your sword which acts as a stun and knocks enemies back. Timed properly, you can stun enemies for much longer when they have an exclamation mark above them, indicating they are about to do a special attack.

This control scheme allows for fast paced fights and, for the most part, a very dynamic and fun way of fighting off enemies in Scourgebringer’s procedurally generated levels. You’ll be running up walls, jumping to one enemy, killing them, dashing to another etc. You’ll end up having many approaches you can take in the same room.

After a tutorial section, you are presented with Level 1, The Entangled Ingress. Each level consists of randomized level-themed rooms that you must defeat, ala Binding of Isaac. The room designs are not at random.

It appears there are a pool of pre-designed rooms which are then selected from at random and then used to generate the levels. So these rooms can start to seem familiar after awhile. However, sets of level-themed enemies (Xenos) are then randomly spawned into the rooms as well as the chances for loot drops.

Each basic room has 2 fighting stages where you must defeat 1 wave of spawned enemies and then a second, stronger wave. Once both are defeated, the room is cleared. You then get a mini-boss room (Guardian) and final boss room (Judge). You need to defeat the Guardian(s) before you gain access to the Judge room. Rooms also have environmental dangers such as spikes and toxic gas. These can get really annoying… especially the toxic gas.

Buffs and loot prove invaluable throughout the levels. So thank goodness there are shop rooms where you have merchants selling items for blood droplets or even your own health. They usually have 3 randomly generated items. There is also 1 room per level that has an Altar of Blood.

These allow you to choose (usually) one of 3 Blood Blessings which is a buff for your run. These can be things like revealing shop locations, doubling your blood droplets and increasing the chances of high grade loot drops.

An overall problem I have with ScourgeBringer is how fleeting any health drops or items appear to be especially later on. This could be for difficulty balancing purposes but at times it can be saddening to go to the next level with the best items you’ve gotten on a run, a full stock of blood drops and then find no health items to spend it on.

It really is annoying, and I could go to the third level with full health only to be destroyed at the end of the run and enter the fourth level with barely any health. Basically, protecting your health can be at the cost of the fun you’re having depending on the level.

There is quite the variety of basic and advanced enemies (Xenos and Alpha Xenos) such as cannon fodder worms, challenging devils and living hell spawn bees that can go die in a fire. Some enemies are far more scary than others and projectiles will probably be your doom.

Before an enemy attacks, usually they will have an exclamation mark appear above them that allows you to stun them before they get the chance to attack. Later on you can get upgrades that allow you to deflect projectiles and smash enemies into the walls or their buddies for more damage.

There are also a limited set of Guardians and Judges. Each level has its own Guardian(s) and Judge. Once the Judge is defeated you can move onto the next level. Guardians and Judges drop Judge Blood upon death which is used to upgrade your skill tree – making ScourgeBringer a Roguelite, meaning that you have permanent progression in some form. The tree persists through your playthroughs and so you will gradually become stronger even if you get stuck on the first level Judge (for e.g.).

As you go Dark Souls style, and die and die again, you’ll learn bosses’ patterns and some good strategies when going into certain rooms. I believe this is what the design intended for the most part when it comes to the difficulty of the game. Learning when to use the blood altars, buy from the shops etc., is part of the challenge and risk-management of ScourgeBringer.

However, at times I think the environmental dangers and bullet hell scenarios could be unnecessary in certain circumstances, such as with the bees and toxic gas. The 1st and 2nd levels felt quite fair in how they presented the enemies and danger. The 3rd level (and I’ve barely gotten to the 4th level) decided to notch it up a LOT with enemies and environments. It does seem that the number of rooms decreased with the 3rd level and so I wonder if that was done to ease the difficulty of progressing. And again, the lack of health drops doesn’t help this situation. There does seem to only be 7 levels (based on the number of Judges you can see later). Perhaps curving the difficulty up was their choice for keeping players playing and engaged longer.

In ScourgeBringer, you have a literal skill tree (the Chiming Tree) that you will revisit after every death. Using Judge Blood (as mentioned previously) you can upgrade different paths of the skill tree which gives Kyrha permanent buffs for the next run like more HP, additional blood drops at the beginning of a run and new abilities. I like the skill tree so far as it definitely gives you more motivation to push onwards because at least you know that the more you upgrade the easier the fights should become. In theory at least.

The modern era of gaming has brought about a lot of quality of life updates. One of which is usually being able to quit right where you are in a video game and continue off from the exact spot. ScourgeBringer does not do this. Instead you are told that all progress (besides Judge Blood and discoveries) will be wiped and you will be sent back to the Chiming Tree when exiting the game no matter how far you are…

THIS SUCKS! Why on Earth would they do this!? It is one of the most irritating, devastating things to do to a player. Imagine you’ve gotten the furthest in this run than ever before, only to have to switch off your PC because of a storm and lose ALL that progress! It happened to me – multiple times! I nearly lost my PC to a storm because I had gotten so far and thought I’ll just leave it on pause while I visit a friend. Then I saw electrical hell in the sky on my way back! It was a miracle my PC was fine after the amount of lighting I saw near my house. Basically, had my PC been fried, ScourgeBringer’s lack of continuation would be a primary factor.

I do think that this is unacceptable. It puts me off trying to play short sessions when the game insists you give it all your attention for as long as possible. Everyone has a life to live. You can’t expect players to devote their lives to your game (and a sneaky part of me thinks ‘saves’ may be an upgrade later on – if it is I’ll be peeved).

On a lighter note, the sound design is fantastic. Different enemies have their own audio cues, and these cues help a lot when taking in all the visual information. The audio balance should be noted as nothing is too loud or isolated from the rest besides important stun moments where you may want to hear one enemy attack over another. The audio is quite unique as well. Some distortions and fantastical noises are really interesting and play to the air of mystery surrounding the ScourgeBringer.

The music is kinda limited on the other hand. There is one unique background track per level but only one combat track for all room encounters and Guardians and one Judge track for all Judges. It would have been interesting to have different themes for at least the Judges – so it was a bit disappointing to reach the second Judge only to hear the same track.

I love the core combat system in ScourgeBringer excusing the fat flaw I mentioned earlier. It’s very fun and challenging for the most part. The visuals are amazing and polished, although a few enemy designs seem slightly repetitive. The soundtrack and difficulty balancing could be better. ScourgeBringer is a great game for those seeking another platformer challenge, an Ordeal if you will, with gorgeous pixel art reminiscent of Hyper Light Drifter.

ScourgeBringer has a fantastic combat system with a very beautiful and solid art direction. However, the music is limited, some enemies/levels are more annoying than challenging and not being able to continue a current playthrough is a real downer (it has impacted the gameplay score considerably).

Megan here! I am pretty well versed in all things weaboo and geek. I've loved videogames since I was born and even made my own for my 3rd year of Multimedia at the University of Pretoria in sunny South Africa. I have enjoyed anime from the days when Pokemon was considered satanic and Aniplex used to exist on DSTV. In the past couple years I have really gotten into manga, particularly Berserk to see where the story headed after the original anime. If there's one thing I will always love 110% it is cats. Don't doubt my faith in my love for felines.
Previous Devil May Cry V Special Edition launches on next-gen
Next Kunimitsu arrives in Tekken 7 today