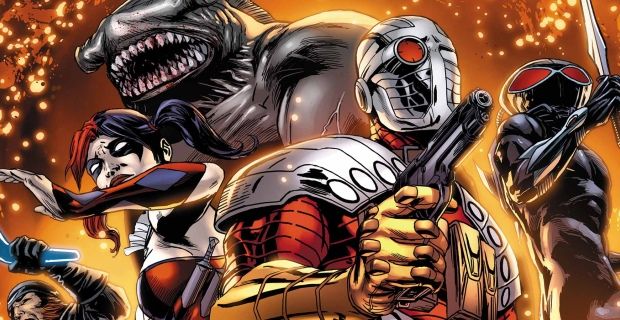 It was a big day for the Suicide Squad at the DC FanDome yesterday, with a pair of big debuts. Get a peek at both the film and the new game.

If you haven’t been playing attention, Warner Bros and DC are giving Suicide Squad another shot at greatness. Yes, even in the face of the first feature film being something of a bummer, there is a sequel coming. Well, sort of.

Kinda/sorta a soft-reboot, The Suicide Squad (that’s the title) is being directed by Guardians of the Galaxy’s James Gunn. It stars a mostly new set of villains, though with Harley Quinn, Captain Boomerang, Amanda Waller, and Rick Flagg all returning.

If that sounds like there wouldn’t be that much room for new characters with all of those returning villains, you flatly have no idea how many characters are in this thing.

The Suicide Squad debuts in theaters (remember those?!) in 2021.

And then there’s the game.

Heavily rumored before being leaked this past week, Suicide Squad: Kill the Justice League is also coming up. The new game is from Rocksteady, and will indeed take place in the “Batman: Arkham” universe.

KtJL’s action is set in Metropolis, will apparently feature and open-world of play, and star four modern mainstays of the Squad. Players will be able to take after the League as Harley Quinn, Boomerang, Deadshot, and King Shark.

If you played the Arkham games, then you no doubt have a few questions right about now. For starters, why does Deadshot look completely different? And also, is this a Batman-less Justice League that the Suicide Squad is going after? Wouldn’t it have to be? Unless maybe it’s a sort of prequel/sequel type of thing.

In any event, here’s the trailer:

Jason's been knee deep in videogames since he was but a lad. Cutting his teeth on the pixely glory that was the Atari 2600, he's been hack'n'slashing and shoot'em'uping ever since. Mainly an FPS and action guy, Jason enjoys the occasional well crafted title from every genre.
@jason_tas
Previous Crysis Remastered officially coming to PS4/Xbox One and PC next month
Next DC FanDome: Gotham Knights game puts players in the boots of the Bat-Family