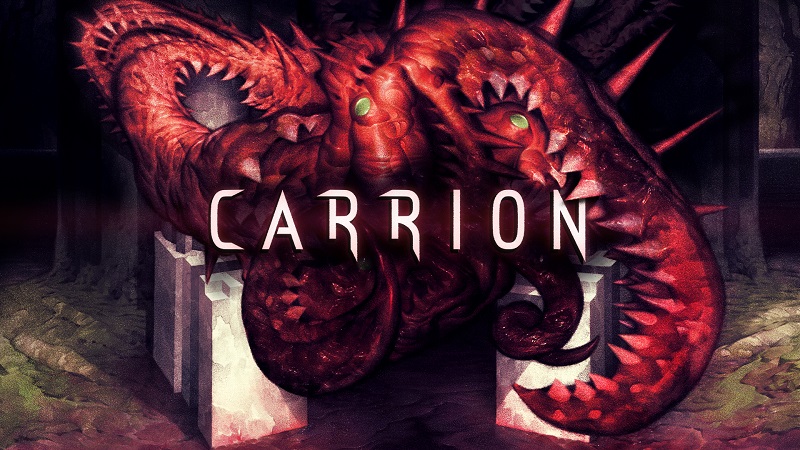 Plenty of games task players with contending with a monster. Carrion flips the script and allows players to take up the role of the escaped monster. The result is a slick and satisfying metroidvania. There is a lot to love in this little package from Phobia Studio and publisher Devolver Digital.

Carrion bills itself as a reverse horror game. You control the monster from the moments before it is born into the world. Let me be very up front with this point, though. I have grown up on Alien and The Thing. Controlling the monster, as a prospect, was immediately alluring, and maintained its novelty throughout the entire game.

After the introductions, there isn’t much story to be had. For me, that works nicely. There are some brief snippets where we glimpse into the creature’s past, and these total fewer than five. Some people will itch for more information, but this amount of backstory worked perfectly for me. The main concern here is to guide the creature, through any means necessary, out of the facility in which it was bred. There isn’t really enough story for this to be a drawback. I will say, though, that if you are a player who loves lore above all else, Carrion might leave you wanting a bit more.

From the first couple minutes of gameplay, it becomes clear that the only way you are interested in communicating with the crew in the facility is by murdering and consuming them. Carrion takes standard metroidvania staples and layers it on top of the idea that players are controlling a massive, hungry and angry monster.

Players control the monster by holding the left mouse button down, and then by watching in awe as its disgusting tentacles reach out and pull it in the direction the player clicked in. At first, the movement was a little wonky, but it quickly became as natural as guiding Mario through 1-1. You control the monster’s prehensile tentacles with the right mouse button. This is how the monster grabs and feeds on the facility’s staff, and there are very few video game actions that feel as good as chomping down on some scientist does.

Throughout the game, players gain a few different types of upgrades. There are major, bio-mass upgrades which grow the creature from a small abomination into, eventually, something that would make the Queen Xenomorph cower and smaller upgrades that don’t mke you any bigger, but increase your offensive, traversal and defensive tool sets.

Most of the combat in Carrion is trivial. Normal humans pose no threat at all and combat-ready humans can be dealt with using simple positioning and planning. The toughest enemies to fight were the people sitting inside a walking tank. Even these are pretty simple to deal with using a little forethought. The game isn’t the hardest thing I have ever finished, and honestly, I love it for that. I am playing this game to murder my captors, not get stressed out about every single encounter.

Throughout the game, different levels of biomass and different abilities make each portion of the game feel wildly different. It is imperative to play differently as a small, newly escaped monster than it is a hulking monstrosity. Both are compelling, though, and that balance is one of the reasons the game feels so good throughout.

The only portion of gameplay I can point to as something I actively disliked are the portions where you are forced to leave some of your biomass behind in order to solve a puzzle. In theory, this is great, but the game uses these instances to force confrontation. Fights that would be trivial are suddenly puzzles of their own. This isn’t a bad idea, and I didn’t even dislike these portions, but I am playing this game to be a rampaging monster, so let me rampage!

One other idea I did not love include the data logs, of a type, the player finds and plays through. For spoiler reasons, I will end it there, but I will say these scenes are slow and represent a break in the action I personally didn’t think was necessary.

Carrion is a bloody game. Not only is it bloody, it is vile, gross, and visually stunning.

As you can see in these screenshots, the game utilizes pixel art, which, in my opinion, is an excellent choice for a game going this hard on the gore. Not only does the player monster rip scientists and soldiers limb from limb, but the monster appears to consist solely of exposed tissue. It is brutal imagery, and the bright red of the monster sticks out against the dark backgrounds, proving that aesthetics and functionality can go together, even in a game about killing and eating people.

There are several different environments the player moves throughout, unfortunately, many of these end up looking similar. There are a couple standouts, like the underwater area and the research labs, but otherwise, the environments blended together in my mind. They are functional, but not very memorable.

Music and sound design is another piece of the puzzle, and in Carrion, it is fine. I can say I really enjoyed it during my time playing, but thinking back now, none of the music has made a huge impression on me. The monster sound design is top notch, though.

Carrion is exactly the type of game I wanted to play. It is short enough to stay fresh throughout its entire length, but long enough to provide a true sense of character growth (literally!!!). It is fun to play, with only a few tedious moments throughout. Carrion knows what it wants to be and doesn’t stop until it accomplishes it.

Devolver Digital provided BrutalGamer.com with a copy of the game for the purpose of this review.

Come to life as a monster, and make the men who made you pay. Through a vicious art style, Carrion brings monsters and metroidvanias together in an impressive and compelling way.

Erich was introduced to gaming by his grandfather before he could walk. Since then, he has grown up loving Nintendo and most games in general. He couples his love of videogames with journalism to cover news, provide reviews and tell it how it is in the gaming world.
Previous SDCC 20: Hasbro announced Louis Tully Ghostbusters exclusive
Next Death Stranding (PC) Review