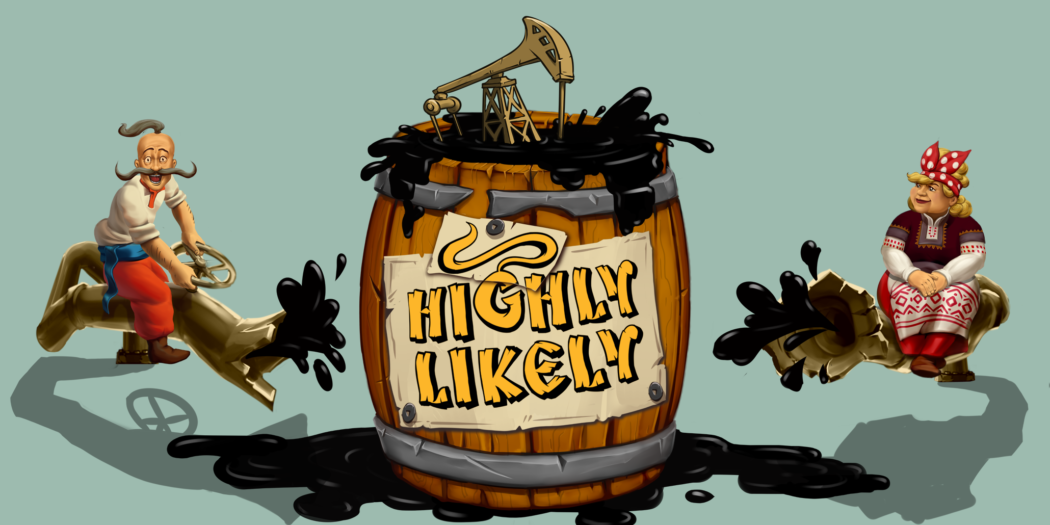 This week I played Highly likely, by Mikola Games. It has a lot going for it, but also doesn’t seem like it wants to be particularly interactive.

But why is this a game?

There comes a time in every review where you know exactly why your review topic needed to specifically be a video game. It can be anything from, “because the gameplay is unique/challenging/fun” to “because the story needed to be interaction to have its full impact.”

A horror game needs you to be in control to reach that level of scary that movies and books can’t. An action game gets your blood pumping by making you the one that pulls off the crazy manoeuvres, and let’s not forget how much better it feels to beat an RPG when you were the one saving the world.

Highly Likely is something that absolutely did not need to be a game.

Not to say I didn’t like it, mind, as it has many wonderful qualities. The artwork is outstanding, I quite like the music and the story has a sort of Fantastic Mr Fox vibe that comes across as charming. However, I can’t say I would recommend Highly Likely due solely to it’s gameplay.

We’ll get into the why’s in a paragraph, but first I have to say that Highly Likely is an Early Access Game, so keep in mind that these issues could be fixed.

The story, or what I can share without spoilers, concerns itself with Mikola. Mikola is a Russian farmer, I think, who took out quite a sizable loan to start growing corn, I believe.

It seems like the corn growing went poorly, placing Mikola and his wife in the awkward position of crippling debt. Fun! Now, Mikola must siphon oil from a nearby pipeline to convert into gasoline, which he intends to sell to pay off this loan.

Some of you may have noticed that I guessed at a lot of the description there, and I have a good reason for that. When I started the game, I selected English as the language. Highly Likely took this as more of a suggestion than a command and defaulted to what I can only assume to be Russian. The game is also devoid of subtitles, so I have literally no idea how this starts aside from the context clues the opening cutscene gives.

Aside from this, the game’s story is charming if a little tedious. It’s selling itself as funny, which I didn’t get personally, but still retains a positive tone as it goes on. There’s some nice cheerfulness on display here, like all of this starting with Mikola just wanting a vacation with his wife. That’s a downright adorable motivation!

It’s commendable in its own right, since we’re dealing with Russian poverty in what looks like post-World War I and yet pre-Bolshevik Russia. That was a terrible time to live in and the game really does seem to make it more cheerful.

That being said, the characters are all sort of bland. The narrator voices everyone, in a suspicious Russian accent that frequently sounds more Indian than Russian, and they all speak in the same way. Their voices change slightly, but they still sound like the same guy reading from a storybook, which may indeed be the point. If that is the point then just remember, an intentionally boring thing is still boring, and the characters feel boring for that reason.

Woof, this is the big one. Highly Likely doesn’t feel like it wants to be played. I truly think that if the developers could have, they’d never have you control the character at all. That may be a blessing though, as Mikola controls like a bag of drunk marbles.

He glides around the level, frequently stuttering even when walking in a straight line. I heavily suggest you play with a keyboard, as using a controller is a coinflip on whether you’ll exit this stage in 10 minutes or 10 hours.

Highly Likely is a strange sort of point and click adventure, with no pointing and clicking. You walk toward objects and use the action key to pick them up. Once they are comfy in your trousers, you can cycle through them with control and use them at their appropriate moments. Which adds a heaping dose of adventure game logic into a slow process.

For those that don’t know, adventure game logic is the single train of logic that the developer had when they developed the game. So you can’t use the big hose to syphon petrol, because the developer knows that you need that hose for a different stage, so you need to collect a pipe to call a stork that stole your small hose instead. I’m not joking, that is in the game.

I would almost consider Highly Likely a walking simulator, but I’m not sure it fits into that. Everything is super scripted, like a walking sim would be, but it feels more like a play than anything else. You climb the ladder, the bird knocks you down, so you climb it again and the bird knocks you down again, then the ladder is inaccessible until you get the bird back. I even experimented and started moving down the ladder, but the bird still knocked me down with its mind presumably.

There is a fun mini-game or two, like very early on you need to distil the oil into gasoline in a boiler, which is entertaining and adds to the happy-go-lucky tone. However, the game is so bogged down with backtracking, slow movement, horrendously slippery movement and waiting for the narrator to shut up that you never have any fun.

The visuals in Highly Likely are by far the best part. They are absolutely gorgeous, with bright colours and wonderful designs. The backgrounds look almost like paintings and generally the animations fit the tine well, with only the occasional animation mess up. I have noticed that the characters seem to have been dubbed, which I personally find adorable, and each one stands out in the detailed backgrounds clearly.

The audio is also good, with nice music and ambient noises that add to the scenery. The narrator is sometimes an issue though. As mentioned above, he speaks for everyone which can get old quick. The game also had the occasional audio glitch where the narrator’s lines were spoken over by a character, which is an existential and temporal anomaly I don’t really feel qualified to discuss.

It was difficult to decide what I should leave out of this review, as Highly Likely had many points I didn’t like and quite a few that I did, For the sake of brevity, I will simply reiterate. Highly Likely does not need to be a game and being a game does not benefit it. A story is only as good as its beginning, its ending and the medium through which we experience it.

By far the worst part of Highly Likely is its gameplay. It often felt like the game just wasn’t meant to be played, but rather watched. I truly believe this could be a good cartoon or even comic, something that would make full use of the art style and tone they set throughout. Having it as a game is simply a waste of potential.

Then again, the game is still early access. They may tighten up the controls, speed up the character, bring in another voice actor or two and even make it funny by next month. Right now, I cannot wholeheartedly recommend Highly Likely as a fun game. If you could convince a mute friend to play it while you watched, then go for it! Afterwards, you should try your hand at experimental therapy because you are obviously a hypnotist.

In all seriousness, I would like to ask that you watch Highly Likely. There seem to have been quite a few bug patches lately, and I don’t think the developers will be abandoning this anytime soon. If notable improvement happens, then check it out. It’s charming and very well drawn, but it needs polish.

A review unit was provided by Mikola Games for this review

Young, talented, funny, hard working, duck-like, consistently punning, the center of a collapsing star, older than time and weird. He is two of these things. Beyond that, I'll never tell...
Previous Warhammer: Chaosbane gets surprise 5th hero – the Dwarf engineer Keela
Next Need for Speed Heat’s March update brings new cars and more