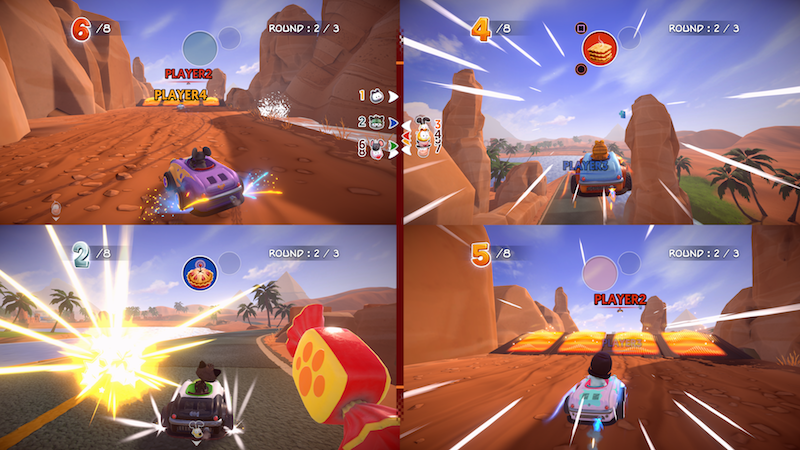 Garfield is back in the drivers seat in another kart racer, as Garfield Kart Furious Racing races onto consoles and the PC today.

Racing with the fat cat

Kart racers might not be as popular as they once were, but it was only earlier this year that we saw a resurgence in the genre. Crash Team Racing, Team Sonic Racing, and of course Mario Kart on mobiles all are out and about at this point. While Garfield might not be a name that’s instantly recognizable with kart racers, now he’s back too.

The sequel to the original game, Garfield Kart Furious Racing brings the funny fat cat and crew back to the track for another spin. From Microids and Paws, Inc., the game offers racing action for up to 8 players online (or via connected consoles) and split-screen local modes for 2-4 players.

Fans of racing, cats and lasagna: get ready!

Garfield, the world-famous cat, is back to take on Jon, Odie and their friends in this racing game where anything goes! Each of the available characters and karts (which can be customized with dozens of accessories) has its own characteristics and a unique driving style: make a strategic choice to match your play style so that you can cross the finish line in first place! Get off to the best start on the starting line and master tough skids to save time and win the race.

Crazy bonus items will be available too, including the pillow and the magic wand, to give you the edge over your competitors. And if you are as lazy as Garfield, take shortcuts and use the Spring to overtake everyone else!

Garfield Kart Furious Racing is available now for the PS4, Nintendo Switch, Xbox One, and PC.

Jason's been knee deep in videogames since he was but a lad. Cutting his teeth on the pixely glory that was the Atari 2600, he's been hack'n'slashing and shoot'em'uping ever since. Mainly an FPS and action guy, Jason enjoys the occasional well crafted title from every genre.
@jason_tas
Previous Marvel 2099 is back in a new Spider-Man epic
Next Check out Rune II’s co-op play in the latest trailer