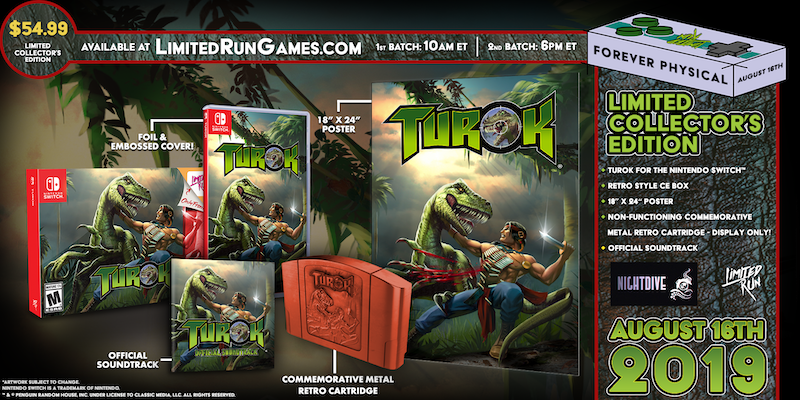 It’s going to be a big Friday this week for Limited Run Games fans. Turok 1 & 2 are coming up, along with The Bard’s Tale and Slime-san.

If you’re still a fan of physical games, then you no doubt know Limited Run Games well. The company has made a name for itself licensing smaller and, at times, older games and then issuing them on disc.

This Friday the company has a fresh slate of them on tap. That’s a collection that includes both limited Collector’s Editions and standard versions of Turok and it’s sequel Turok 2: Seeds of Evil. Then there’s also the classic RPG The Bard’s Tale, and niche fave Slime-san.

The latter two are PS4 titles of course, with the Turok’s hitting for the Nintendo Switch. All of it will go up for sale on Friday though, with 10am and a 6pm (eastern) time slots.

Why specific time slots? Because Limited Run Games sell out fast folks. Very, very fast. Actually, make sure you log into LRG before the sale starts to get the best chance of actually getting one or all of these for yourself.

Here are the official rundowns:

Jason's been knee deep in videogames since he was but a lad. Cutting his teeth on the pixely glory that was the Atari 2600, he's been hack'n'slashing and shoot'em'uping ever since. Mainly an FPS and action guy, Jason enjoys the occasional well crafted title from every genre.
@jason_tas
Previous Skateboarding title Session early-access dated, gets new trailer
Next Ion Fury (PC) Review: Built by History